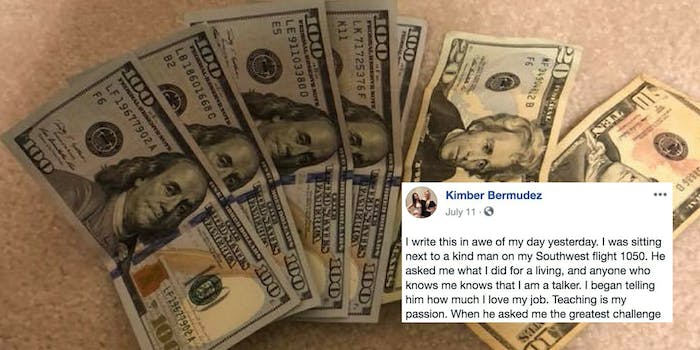 A Chicago teacher’s post of appreciation and inspiration is going viral after she received classroom donations totaling more than $500 from passengers on her flight.

In her post shared on July 11,  Kimberly Bermudez wrote that she received the generous donations while on her way to visit her parents in Florida. During her flight, she had been asked by her seatmate what she does, and being a “talker,” Bermudez said she told him about her passion for teaching.

When she was asked what her greatest challenge is, she told him about the difficulties of working at a low-income school. The Washington Post reported that Bermudez works at a charter school, Carlos Fuentes Elementary, and that teachers and administrators often pay for the students’ resources, be they supplies or clothing, out of their own pockets.

“We talked about the world and how no child should ever do without,” she wrote in her Facebook post. “In 2018 kids should never be hungry or in need of anything.”

Her seatmate then told her that his company likes to donate resources such as supplies and time to low-income schools, and asked for her work contact information, which Bermudez wrote she hadn’t anticipated while telling him about work. However, it was the man sitting behind her who made the first move of kindness.

After apologizing for eavesdropping, he handed Bermudez a wad of cash, she wrote. It wasn’t until she later counted the stack that she realized he had given her $500 in cash for her classroom.

“He told me to ‘do something amazing’ and sat back down. I was in complete awe that I had touched a stranger. I realized that there was $100 on top, and started to cry,” Bermudez wrote. “I thanked him and told him how I would buy my students books and give back to the community.”

The generosity didn’t stop there. After her plane landed, Bermudez was given another $20 from a man sitting across the aisle from her, and $10 from the man sitting in front of her as well. They both told her they didn’t have much on hand to share, but she cried at the kind gesture, telling the other passengers that she would do “something amazing” for the kids with the donations.

“I said, ‘I’m not here to solicit money; I really am here on this plane just to see my parents,” she told the Post. “And one of them said, ‘I know. That’s why we’re giving it to you. Use your voice. Use your gift of talking.’ ”

She signed her post with her name, the date of her flight, and her seat, “Aisle 14, Seat C,” stating that she wanted to thank the kind strangers and that they deserve to be recognized for showing that even when the world seems “crazy,” good people still exist.

“I was not telling my story to solicit money, and never intended to walk out of that flight with anything other than my carry on. I do however hope that posting this continues the chain reaction of people helping those in need, and especially the children in need,” Bermudez wrote. “It doesn’t have to be a school in Chicago, and any bit helps!”

I write this in awe of my day yesterday. I was sitting next to a kind man on my Southwest flight 1050. He asked me what…

Bermudez’s post has since been shared more than 800 times and has received more than 1,300 likes

Bermudez told the Post that she’ll be using the donations to purchase backpacks and school supplies, but primarily books for students to keep at home—she said students often tell her they aren’t able to read at home because they don’t have the resources.

“This experience made me want to do more for the kids, and use my gift of speaking to help others in need. I want to pass this story around, and thank those strangers and their amazing hearts!” Bermudez closed her post.