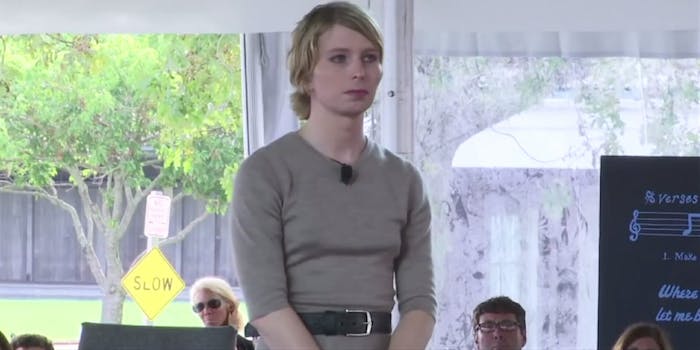 She thinks the best way to fight your enemies is to meet them.

Transgender activist and former whistleblower Chelsea Manning is in a bit of a bind. After reportedly crashing a far-right party that ran opposite the Women’s March, left-wing activists are calling out Manning for socializing with a group that harbors white supremacists.

Originally reported on by BuzzFeed News, Manning attended “A Night for Freedom,” a one-year celebration party setup by right-wing superstar Mike Cernovich honoring President Donald Trump’s inauguration. Cernovich, who first came into prominence through #GamerGate and later peddled the far-right conspiracy theory #PizzaGate, planned the event as a “gathering of patriots and political dissidents” who are “bored with mainstream political events.” And as far as attendees go, everyone from Project Veritas founder James O’Keefe to Vice co-founder and far-right wing Proud Boys creator Gavin McInnes joined in attendance.

Manning, as both a prominent whistleblower and left-wing activist, obviously stood out that night. So after initial reports began trickling in that she appeared, many in the left became skeptical as to why she came to the party in the first place.

Officially, Manning claims she crashed, and it seems that may be the case. The Observer reports Manning later slipped in with antifascists protesting the event outside “after sipping cocktails with the organizers just moments prior.” While Manning did spend most of the night hanging out with far-right reporter Cassandra Fairbanks, who she is reportedly friendly with, she left the party before the night’s speeches began proper.

“Crashed the fascist/white supremacist hate brigade party,” she tweeted. “All selfies were denied.”

Still, “crashing” may not be the best way to describe the night. One source who knows Manning told BuzzFeed News that she “was not there protesting,” but rather attended in an “effort to bridge gaps between left and right.” Manning herself later posted on Twitter that she “learned in prison that the best way to confront your enemies is face-to-face in their space.”

“I think it’s clear that she does what she wants and doesn’t give a shit,” Cernovich explained, BuzzFeed News reports. “And I think she knows that we’re the same way.”

This doesn’t appear to be the first time Manning hung out with the figures in the far and “alt-right,” either. One photo circulating from New York Magazine’s Yashar Ali shows Manning posing with several far-right conservative figures, including MAGA Meetups executive director Will Chamberlain, the Gateway Pundit’s Lucian Wintrich, and Fairbanks once again. At the very least, Manning comes off as friendly with a couple folks in the far-right.

Suffice to say, Manning’s actions are raising more questions than answers throughout the left. Some activists think Manning is inadvertently enabling the far-right’s bigotry.

"I was protesting that too. See, I was kneeling! #StayWoke #BlackLivesMatter" – Chelsea's inevitable response https://t.co/XCmranogH1

In fact, a couple left-wing Twitter users have concocted larger conspiracy theories about Manning being an “alt-right plant” while she runs for the U.S. Senate.

The Russians use “Useful Idiots” from both political extremes. Here is an example of them coming together. Manning says she was crashing but is in fact friends with many proTrumpers. https://t.co/96iY3dFaBT

She's being used as a patsy to try to get anti-Democratic Party leftists to ally with the alt-right.

Others find the backlash particularly ridiculous, with some arguing that people should not read too heavily into Manning having an occasionally friendly chat with someone from the right-wing.

wonder if Chelsea Manning is a little loopy what with being tortured for 7 years! probably not. she's either perfect and should run for senate or a white nationalist who works for the FSB

i'd like an explanation from chelsea manning about these pictures (if they're even real to begin with) but i don't think it's time to throw her under the bus because of a single fuck up.

Chelsea Manning has a right to be friendly with people without the assumption that she shares their politics. To conclude otherwise is an unfortunate symptom of the tribalism of our times. pic.twitter.com/2iwqDXFRCi

Oh, and there’s plenty of memes coming out about the backlash, too.

As far as her association with the right goes, Manning may still be figuring out how to be an effective political activist while both undergoing gender transitioning and transitioning back to life outside of prison. That’s a lot for person to take on, and it’s understandable that she may make mistakes in the process.

Meanwhile, Manning’s run for the U.S. Senate, along with her friendly demeanor on Twitter, suggests that she sees dialogue as an effective de-escalation step even among enemies. Whether she’s actually friends with people in the far-right or not, well, that remains unknown. But at the very least, it’s safe to say Manning isn’t planning on backing down from the public spotlight any time soon—or political controversy, for that matter.