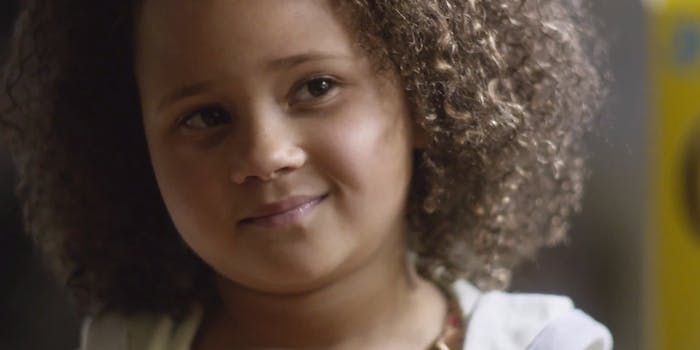 Can this Cheerios ad avoid the racist backlash of the last one?

The company's first-ever Super Bowl ad, titled "Gracie," provided Cheerios with an "opportunity to tell another story about family love."

Cheerios brought back the interracial family that sparked praise and controversy among viewers for its first-ever Super Bowl ad.

Unveiled Wednesday, the new ad, titled “Gracie,” features the family together in the kitchen for breakfast. Using the Cheerios as a prop, the father explains to his daughter that she will soon get a brother. She then uses them as a bargaining chip.

Just like the original Cheerios commercial that aired back in May, it’s completely adorable and will probably put a smile on your face in between plays of the big game—especially if your team is a little worse for wear.

The first time around, Cheerios faced backlash from racist commenters for featuring an interracial family in its ad. While the YouTube comments were disabled, the company did not back down, saying they wanted to celebrate all kinds of families. And many kids didn’t even see what the big deal was.

“Like millions of Americans, we just fell in love with this family,” Camille Gibson, vice president for Cheerios at General Mills, told the New York Times. “The big game provided another opportunity to tell another story about family love.”

The racist comments are still there in the comments sections for “Gracie,” but the first controversy came not from the comments, which mostly take a much more accepting tone this time around, but from MSNBC. The network posted an offensive tweet Wednesday in which it suggested the right wing would hate the ad because it featured the interracial family. It later deleted and apologized for the tweet.