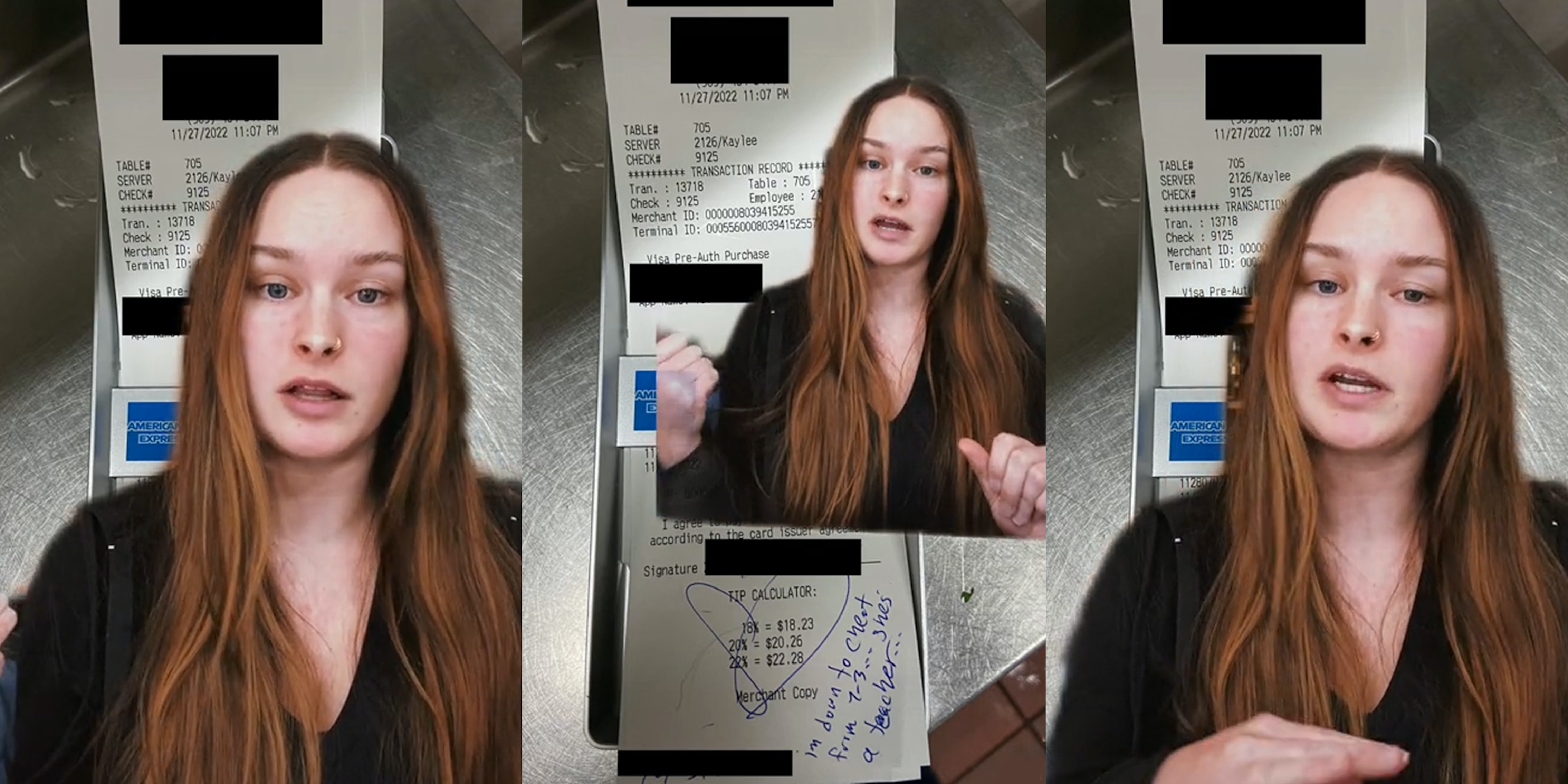 ‘So you tipped me poorly, and you want me to help cheat on your wife?’: Customer leaves phone number for server—but tips only 10%

'It's always the 'big flirts' who tip like crap.'

A nightclub server says a customer left her his number and was down to cheat on his wife—but he tipped the server less than 10%.

The server, Kay (@kayy_jade), posted a TikTok video explaining what happened, saying she just had to share the story on “server TikTok.” In the video, Kay says she was serving a table with two men and a woman. One of the men was seated next to the woman and had his arm around her, so Kay assumed that they were a couple.

Throughout the night, the trio acted like a regular group of guests and there were no issues, Kay says. At the end of the night, she dropped off the group’s receipt, and when she came back to collect their payment, she noticed some writing at the bottom of the receipt.

Kay says the writing on the receipt said, “I’m down to cheat from 7 to 3. She’s a teacher,” accompanied by a smiley face doodle. The note also included a phone number, which Kay blacked out on the screenshot she shared of the alleged receipt. Despite the invitation to cheat, the customer only tipped Kay $10 on an order that totaled more than $100.

“So you tipped me poorly, and you want me to help cheat on your wife/girlfriend?” Kay says in the video. “No, not gonna happen.”

The TikToker says she immediately decided to tell the woman about the note. She waited until the customer left the table to use the bathroom, then stopped her and showed her the note on the receipt.

“I’m like, ‘Hey, miss. I’m so sorry, I don’t know if this is a joke or like which one of them wrote it, or what’s going on, but I thought you should see this,'” Kay says in the video, recounting what she told the woman.

The woman read the receipt and allegedly told Kay, “well, I’m not dating either one of them, and I have to pee,” the server says. The woman’s comment confused Kay, given that she was cuddling with one of the men all night. The TikToker ends her video by saying she “needs” answers.

“He said you can get the other tip later [laughing emoji],” one viewer commented.

Another wrote, “The way I would [have] said 50% tip and it’s a deal and just never hit him up [crying emoji].”

Some users suggested ways that the TikToker could have used the man’s phone number.

“Look up his phone # and Venmo request him,” one user said.

Other servers shared similar experiences they had had with male customers leaving their phone numbers. Several of them said those customers always tip badly.

“10 years of bartending, every man whose given me his number has tipped 10% or less… like bro wtf,” one viewer wrote.

“It’s always the ‘big flirts’ who tip like crap,” another said.

The Daily Dot reached out to Kay via TikTok comment.