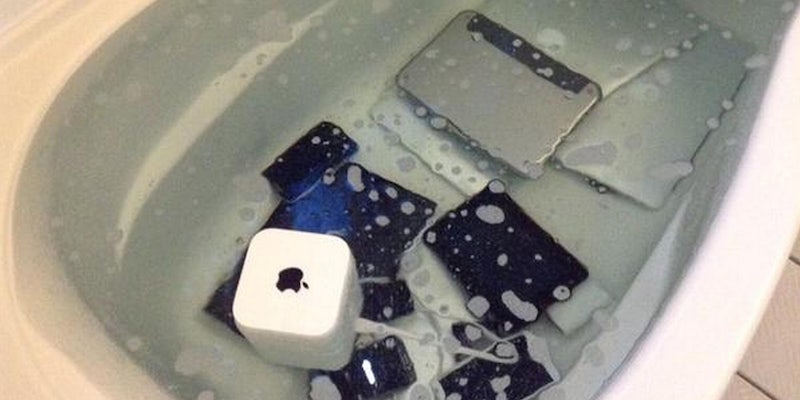 Imagine finding out on Twitter that this is what your cheating earned you.

Anyone in a committed romantic relationship knows that the worst possible thing your significant other can do is cheat on you. Cheating never ends well.

A Japanese Apple fanboy learned that lesson the hard way after his girlfriend drowned all of his beloved devices in a bathtub to punish him for cheating on her.

After discovering what her “darling” had been up to, Twitter user @foolishnessfly2 collected her philandering beau’s sizable collection of Apple products and, without hesitation, dropped everything into a tub full of water and what appear to be soap suds.

She didn’t just want to soak the tech; she wanted to inflict maximum damage.

In a further act of retribution, she took a picture of her expression of “heartache” and posted it on Twitter.

You don’t have to be a diehard Apple fan to feel the pain of this rather extreme punishment. By the looks of it, more than ten Apple devices were harmed in the making of @foolishnessfly2’s tweet. Since its posting, it has receive tremendous support, with over 15,000 retweets and almost 10,000 favorites.

Think about how exposed your beloved gadgets are the next time you feel like stepping out on your beloved.