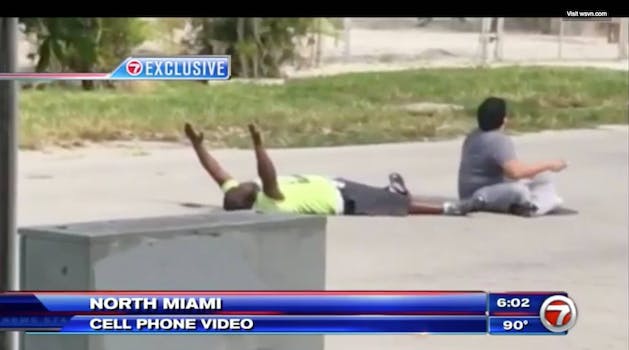 Authorities are investigating the incident.

Miami, Florida, police officers shot an unarmed black man as he laid on his back with his hands held up.

Charles Kinsey, 47, who survived, is a behavioral therapist who was helping a 23-year-old autistic patient on Monday who reportedly escaped from a group home. In a statement posted to Twitter, North Miami PD said they were dispatched after a 911 call was received of an armed male suspect who was threatening suicide.

“Arriving officers attempted to negotiate with two men on the scene, one of whom was later identified as suffering from autism,” North Miami Police said in a statement. “At some point during the on-scene negotiation, one of the responding officers discharged his weapon, striking the employee.”

In the cellphone video posted by WSVN on Wednesday, a pair of police officers are seen approaching the two men from afar with rifles drawn. Kinsey is heard explaining that the man is his patient and the alleged gun is a toy truck.

“All he has is a toy truck. A toy truck,” Kinsey said. “I’m a behavioral therapist at a group home.”

Kinsey is then seen pleading with the officers to not fire and asking his patient to calm down.

The standoff reportedly went on for minutes before Kinsey was shot in the leg. While the shooting was not captured on camera, Kinsey said he had his hands up the entire time.

“I’m like this right here,” Kinsey demonstrated with his hands in the air from his hospital bed in an interview with WSVN.  “When he shot me, it was so surprising. It was like a mosquito bite, and when it hit me, I’m like, ‘I still got my hands in the air.’ … And I’m saying, ‘Sir, why did you shoot me?’ and his words to me, he said, ‘I don’t know.’ … I was really more worried about [my patient] than myself. I was thinking as long as I have my hands up… they’re not going to shoot me.”

Kinsey said police then rushed him, patted him down and handcuffed him.

It allegedly took 20 minutes from a rescue squad to get him before he was transported to a local hospital.

“He throws his hands up in the air and says, ‘Don’t shoot me.’ They say lie on the ground, so he does,” Kinsey’s attorney Hilton Napoleon told the Miami Herald. “He’s on his back with his hands in the air trying to convince the other guy to lie down. It doesn’t make any sense.”

Napoleon also said he was negotiating a possible settlement with the city of North Miami.

“They realize this was something inappropriate regarding the shooting,” Napoleon said. “If police departments come out more and admit fault, that would probably go a long way.”

North Miami Police says they are investigating the incident. The officer who shot Kinsey has been placed on administrative leave, however they have not released the officer’s name nor said if he will face charges.

The Herald reports that Kinsey is expected to come home on Thursday.

Update 2:57pm CT, July 21:  Chuck Rabin, a reporter covering cops and crime at the Miami Herald, said on Thursday afternoon that the officers who shot Kinsey thought the mental health professional was in danger.

In the video posted by WSVN, the patient screamed “Shut up!” to Kinsey after the therapist asked him to lay down on his stomach.

The cop reportedly aimed for the autistic man and missed.