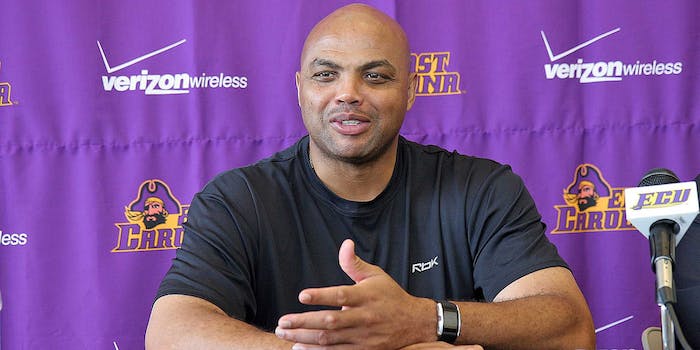 The Round Mound of Rebound wants to take Final Four out of town.

On Friday, NBA Hall of Famer, Olympic goal medalist, and outspoken talking head Charles Barkley issued a statement calling on the NCAA to move the Final Four out of Indiana after the state passed a law allowing discrimination against homosexuals.

“Discrimination in any form is unacceptable to me,” said Barkley. “As long as anti-gay legislation exists in any state, I strongly believe big events such as the Final Four and Super Bowl should not be held in those states’ cities.”

The Final Four is being held at Lucas Oil Stadium in Indianapolis early next month.

The Religious Freedom Restoration Act was signed into law by Republican governor Mike Pence earlier this month. Supporters of the legislation insist that the bill is aimed at protecting the sincerely held views of religious people. However, the law’s detractors argue that it is intended to allow homophobic businesses owners to refuse to serve certain individuals based on their sexual orientation.

Barkley isn’t the only NBA superstar to come out against the bill. On the same day Barkley issued his statement, fellow Hall of Fame inductee Reggie Miller, who played for the Indianapolis Pacers tweeted:

For its part, the NCAA has expressed concern over the law, but said the college basketball championships would continue as planned.

“The NCAA national office and our members are deeply committed to providing an inclusive environment for all our events,” said NCAA President Mark Emmert. “We are especially concerned about how this legislation could affect our student-athletes and employees. We will work diligently to assure student-athletes competing in, and visitors attending, next week’s Men’s Final Four in Indianapolis are not impacted negatively by this bill. Moving forward, we intend to closely examine the implications of this bill and how it might affect future events as well as our workforce.”

While the Final Four is staying put, the boycott of Indiana has spurred other organizations to start making a concerted effort to avoid the state. San Francisco-based cloud-computing behemoth Salesforce canceled all employee travel to Indiana out of fears workers might face discrimination and CEO Marc Benioff urged Silicon Valley tech companies to follow suit.

This controversy isn’t the first time in recent years that athletes have used the threat of moving lucrative sporting events from a state based on the potentially discriminatory actions of its lawmakers. When Arizona passed a restrictive immigration enforcement law in 2010, there were calls for Major League Baseball teams to not have spring training in the state. However, despite daily protests at Arizona Diamondbacks games, everything stayed in the state, which even hosted the MLB All-Star Game the following year.