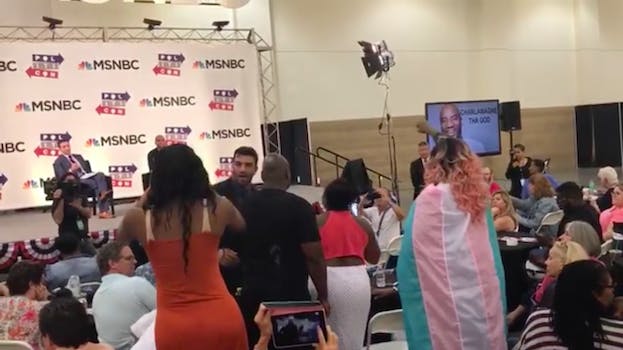 Activists are standing up against the transphobia in hip-hop.

Trans activists Ashlee Marie Preston and Patrisse Cullors interrupted an appearance by Charlamagne Tha God at Politicon on Sunday to protest statements made on his radio show, “The Breakfast Club.”

Preston, who recently made history by becoming the first black trans editor-in-chief of Wear Your Voice, and Cullors, the founder of Dignity & Power Now, stood together in solidarity and chanted, “We are not a joke,” at the radio show host. Charlamagne had recently laughed off comments by rapper Lil Duval, who stated that he would “kill” a trans woman upon discovering he had slept with one unknowingly.

While Charlamagne initially labeled Lil Duval’s statement as a “hate crime,” he and co-host DJ Envy also continued the discussion by holding up Janet Mock’s book Surpassing Certainty and asking Lil Duval if he thought Mock was “pretty.” Lil Duval responded by misgendering Mock, at which point Charlamagne erupted into laughter.

Here is the 2nd part of the discussion about transgenders with @lilduval pic.twitter.com/o7gq0zs1P5

Preston told the Daily Dot that Charlamagne’s response to Lil Duval’s comments was far from adequate. “Speaking on a ‘hate crime’ in the context of their conversation was in consideration of Lil Duval and the trouble he could get into, not a concern for trans women. Or the recognition of their humanity,” she said. “It made us sound as if we were a liability.”

According to Preston, the issue goes deeper than any individual’s hateful comments and extends to the hip-hop culture at large. “LGBTQ people are seen as a threat to masculine identities,” said Preston. “As much as I love hip-hop, a great deal of it [overcompensates] for male fragility and [asserts] toxic masculinity.”

Preston added, “LGBTQ people are the butt of jokes in many hip-hop lyrics, and those who listen to it pick up social cues around how to treat or view LGBTQ people.”

As much as Charlamagne may wish to brush off his exchange with Lil Duval as harmless humor, the high murder rate of transgender women is a reality. In 2017, at least 14 trans women, most them of color, have been killed.

Preston is determined that the conversation will not end here. “I’m working on a formal complaint with the FCC and am looking into legal counsel on how to proceed in regards to hate speech.”

As for Charlamagne, Preston is interested in a discussion, but not on his show. “We are looking to have a dialogue session,” said Preston. “Maybe on BET or another network, but not ‘The Breakfast Club.’”

A petition demanding an apology and to fire Charlamagne is circulating on Twitter and has already received hundreds of RTs.

And many have shown their support of the trans community on Twitter under the hashtag #BoycottBreakfastClub.

It is important to challenge anti-transgender remarks, jokes, and conversations. That is why I support #BoycottBreakfastClub

Trans women's deaths are not a joke #boycottbreakfastclub

Mock, who had appeared recently on “The Breakfast Club,” responded to the use of her image in an essay for Allure.

Wrote about the shock of being used as a prop to incite violence after being a guest on The Breakfast Club https://t.co/G0RnzdqYqb

Mock has long been a high-profile advocate for trans rights, and she closes her essay by pointing out that no amount of her own writing and speaking can change a transphobic culture. Instead, she argues, it’s up to readers and listeners to “bridge the gap,” and so Mock asks, “How will you show up for our sisters who are watching, listening, and experiencing this violence daily?”