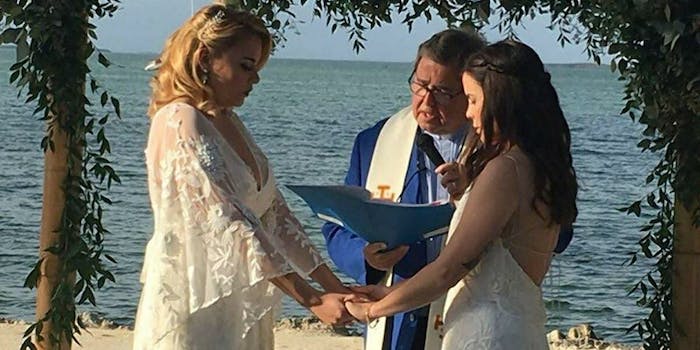 'In their eyes I’m not the right kind of Catholic.'

A day after she returned from marrying her partner, a Miami Catholic school abruptly fired a well-liked first-grade teacher—and she believes she was terminated because she’s gay.

Jocelyn Morffi married Natasha Hass earlier this month, and according to the Miami Herald, she returned to her job last Wednesday. That day, she was told by the Sts. Peter and Paul Catholic School principal that she had to resign. Morffi refused to do so, and she was fired the next day. On Thursday, parents received a letter about Morffi’s firing, and on Friday, about 20 parents demanded to know why.

In an Instagram post, Morffi said, “In their eyes I’m not the right kind of Catholic for my choice in partner.”

One parent of a student taught by Morffi told the newspaper that parents were livid. They apparently didn’t know Morffi was gay, but Cintia Cini said they didn’t care when they found out. She only cared that Morffi was “by far one of the best teachers out there.” She said the principal did not give the parents a reason Morffi was dismissed.

The school did not comment to the Herald, and an Archdiocese of Miami spokesperson said only that Morffi had broken her contract. According to the Archbishop, teachers at the school are seen as representatives of the church and are supposed to uphold the Catholic teachings.

“We were completely outraged, all of the parents,” Samantha Mills, whose child is a former Morffi student, told the Herald. “This teacher in particular has made such a contribution to the school. She never imposes her personal beliefs on others. She just does everything in love. She has a way of teaching that is so amazing.”