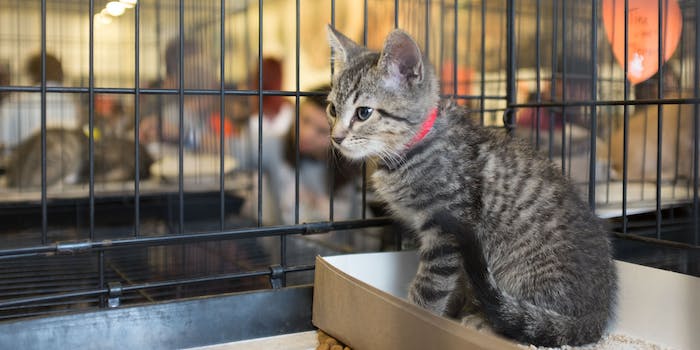 Held in Los Angeles, CatCon is a two-day convention for the feline fanatic.

Last Saturday, in a crowded stairwell in downtown Los Angeles, a small bag filled with a suspicious-looking green substance was pressed into my hand. For a few minutes, the man who gave it to me enthusiastically described its strain and its organic roots, while passersby trying to make the afternoon lunch rush looked at us with annoyance.

It took me a few minutes to figure out that this man wasn’t trying to conduct a brazen drug deal in a stairwell. The substance in my hands, I later realized, was catnip. Cat art for sale at CatConLA

I met my catnip-pushing friend at CatConLA, the inaugural, cat-themed convention that billed itself as “ComicCon for cat people.” According to the New York Times, nearly 10,000 cat lovers were in attendance.

Held at Los Angeles’s downtown expo hall and workspace The Reef, the event was “a lot like Woodstock without music,” according to a middle-aged Valley resident who preferred to remain anonymous. She told me she had seven cats, all rescues, at home. “It’s cat camaraderie.” Bryanna Cleland in costume at CatConLA

CatCon wasn’t just an opportunity for cat fanciers to meet each other and gush about their furry friends. Fans wearing green Animal Planet-branded cat ears also attended feline-themed talks like “Cats, Cartoons and Comedy” hosted by Simon’s Cat creator Simon Tofield, “You Can Be a Cat Guy and Still Be Cool,” and “Photographing Cats—It Looks Easy, But It’s Not.”

Big Bang Theory star Mayim Bialik, a spokesperson for CatCon sponsor PetsMart Charities, was also on hand to promote #meowOUT, a social media campaign aimed at dispelling stereotypes about cats and their owners. To disprove the “cat lady” trope, Bialik led a CatCon panel highlighting glamorous images of women with cats through the ages. Like any convention worth its salt, CatCon also proffered a huge volume of cat-themed merchandise. Over the course of the two-day event, attendees could shop for products that ranged from cat running wheels to cat bowties. Cat lovers could even test out and purchase a robotic cat that looked and acted identical to its IRL counterpart, except without the fur or litter box.

Bub owner Mike Bridavsky was on hand at the so-called “Bub Store.” “[The Bub Store] just happened because people said, ‘Hey, what about a Bub shirt?’ I started working with friends, and now it’s a thriving sort of thing,” Bridavsky told the Daily Dot.

“Since I do it all myself, I’m able to raise a lot of money for charity, I’m able to employ my friends. People love Bub, so it’s attaching something positive and fun and creative to Bub.” Despite the wealth of cat-themed merchandise at the convention, actual cats were in short supply. There was an adoption area, which found homes for 74 cats, much more than the 30 the convention expected to place during the event.  The convention barred attendees from bringing a feline who wasn’t already an approved celebrity guest, such as Bub or the mustachioed exotic shorthair Pudge. These A-list cats conducted meet & greets with fans, but otherwise mostly stayed confined to the small VIP room between events, just like human celebrities. Bridavsky and Lil’ Bub in the VIP room at CatConLA

At conventions like ComicCon, most high-profile celebrities are mobbed by fans. While Bridavsky was able to slip in and out of the VIP room without notice, he told me that when he left the room with Lil Bub, it was another story.

“Usually by the time [Lil Bub fans] realize who I’m carrying, I’m already past them,” said Bridavsky, who alternated between carrying Bub and his six-week-old son while at the convention.

Kady Lone, Pudge’s owner, said she was mobbed by fans whenever she tried to venture outside the VIP room. “If I stop just longer than five seconds, people crowd around me,” Lone said. “If I take her out of her carrier it gets really bad.” Pudge about to take a nap between events

The cat craze as a web phenomenon is well-documented, with Internet stars like Lil Bub inking feature-length film deals and YouTube-famous cats like Henri Le Chat Noir headlining the Internet Cat Video Festival, a cat-themed film festival. Henri’s owner, Will Braden, who runs the festival, thinks there’s a clear-cut explanation for why cats are so popular on the Internet.

“I think the reason cats are so successful online is that people see cats and they want to anthropomorphize them,” he told me at CatCon. “Whereas you see a dog, they’re such an open book. Cats are the opposite.” As a veteran of cat-themed events, Braden said he was not at all surprised that CatCon had such a huge turnout rate.

“Most conventions [like] Comic Con…the first  year is tiny and [then] it expands,” he said. “So far, [CatCon] has been bigger in spectacle and is scope than I could have expected, and it’s just now starting to sink in, the enormity of it. But walking around and seeing everyone, it’s like, ‘Yeah, these are my people.'” Cat people, to be precise. Cats up for adoption at CatConLA Kitten up for adoption