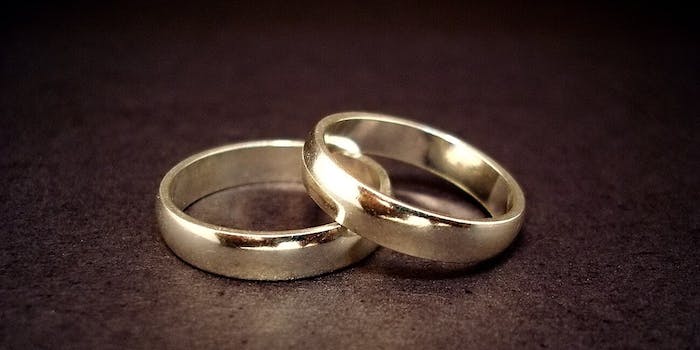 Nothing beats a gay shotgun wedding.

The legalization of same-sex marriage this summer made a lot of couples very happy. It also opened the door for gay shotgun weddings. What could be more awesome?

On Tuesday, Portlandia star and queer icon Carrie Brownstein found herself not only witnessing a spontaneous lesbian marriage—she was also asked to officiate. Of course, she said “sure” and married the couple on the spot.

According to Us Weekly, Kendall Oshiro and Genevieve Hernandez had arrived at California’s Pasadena Presbyterian Church for a reading of Brownstein’s new book Hunger Makes Me a Modern Girl: a Memoir. Amy Poehler of Parks and Recreation was emceeing the event and conducting a live audience Q&A with Brownstein when the couple took the mic and said they’d heard Brownstein was an ordained minister. As it turned out, they’d brought along a marriage license just in case she agreed to marry them right then and there.

With perfect comedic timing, Poehler hopped behind the piano and started to play the only song she knew how to play: “Greensleeves.” As she plunked away on the keys, Brownstein turned to the couple (who carried flowers) and recited, well, whatever came to mind.

“I’m going to quote James Baldwin, um, perhaps incorrectly,” said Brownstein as the audience laughed along. “But you should know that love, and life, and togetherness, involves a lot of incorrectly. It involves a lot of stumbling, mistakes, humor, clumsiness, and I hope that you are with someone that will love those things about you. All of the incorrectlies that you possess.”

Brownstein continued: “Um, I was going to quote James Baldwin. I won’t.” The entire ceremony, which you can watch below and on YouTube from several different angles, actually turned out to be a total tearjerker.

The couple was so clearly nervous that it was hard to recite the vows in front of the crowd of Brownstein fans, and at one point when Brownstein asked “would you like to exchange rings?” the adorable couple literally just handed each other the rings and put them into their respective pockets. But hey if you can get a fierce and biting comedy queer like Brownstein to dab at her eyes, then you are winning.