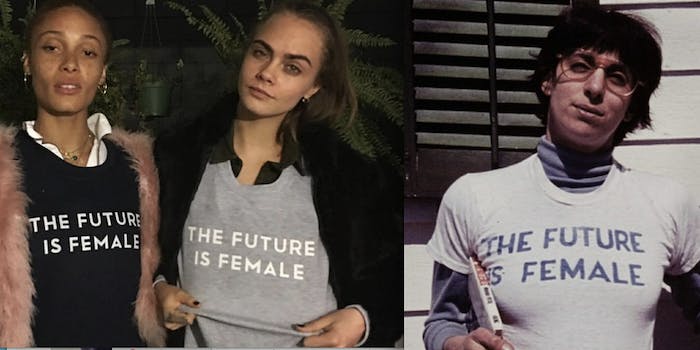 The proceeds will benefit United Nations' Girl Up campaign.

Supermodel and fashion icon Cara Delevingne blasted a cheerful invitation to her 23 million Instagram followers on Sunday morning. She encouraged them to purchase a sweatshirt adorned with the phrase “The Future is Female,” promising a big chunk of proceeds would go to the United Nations’ Girl Up.

The only problem? The design was reportedly stolen.

Rachel Berks of Otherwild says that Delevingne’s choice to simply reproduce the sweatshirt design and sell it as her own infringes on copyright. Berks explained to the Daily Dot via email (and a subsequent Instagram post) that the slogan originates from Jane Lurie’s and Marizel Rios’ Labyris Books bookstore, and Cowan’s image of Alix Dobkin was used with permission.

“Otherwild’s reissue and redesign of the slogan is protected under copyright law, which mandates that any reproduction of an existing known public work must be altered at least 20 percent from the original,” Berks said. “If Delevingne wanted to sell my shirt design, she would need to wholesale them from Otherwild—and because Otherwild donates 25 percent of our line proceeds to Planned Parenthood, Delevingne’s ethical practice would benefit not only our women-owned small business, but also serve as a significant donation to PP.”

Berks says that if Delevingne wanted to do something different with the proceeds, she could still use the slogan and just create a different design. She called her actions “unscrupulous and unethical” and says it ironically counters the message of the shirt.

“It is confounding that she would do this to a small, queer feminist-owned business after purchasing the product from us just a few weeks ago,” Berks said. “She has changed the attribution several times today, but she has not offered to wholesale from us, or cease and desist producing and selling our shirts and create her own design.”

Delevingne and her team did not immediately respond to a request for comment.

Photos via Cara Delevingne and h_e_r_s_t_o_r_y/Instagram