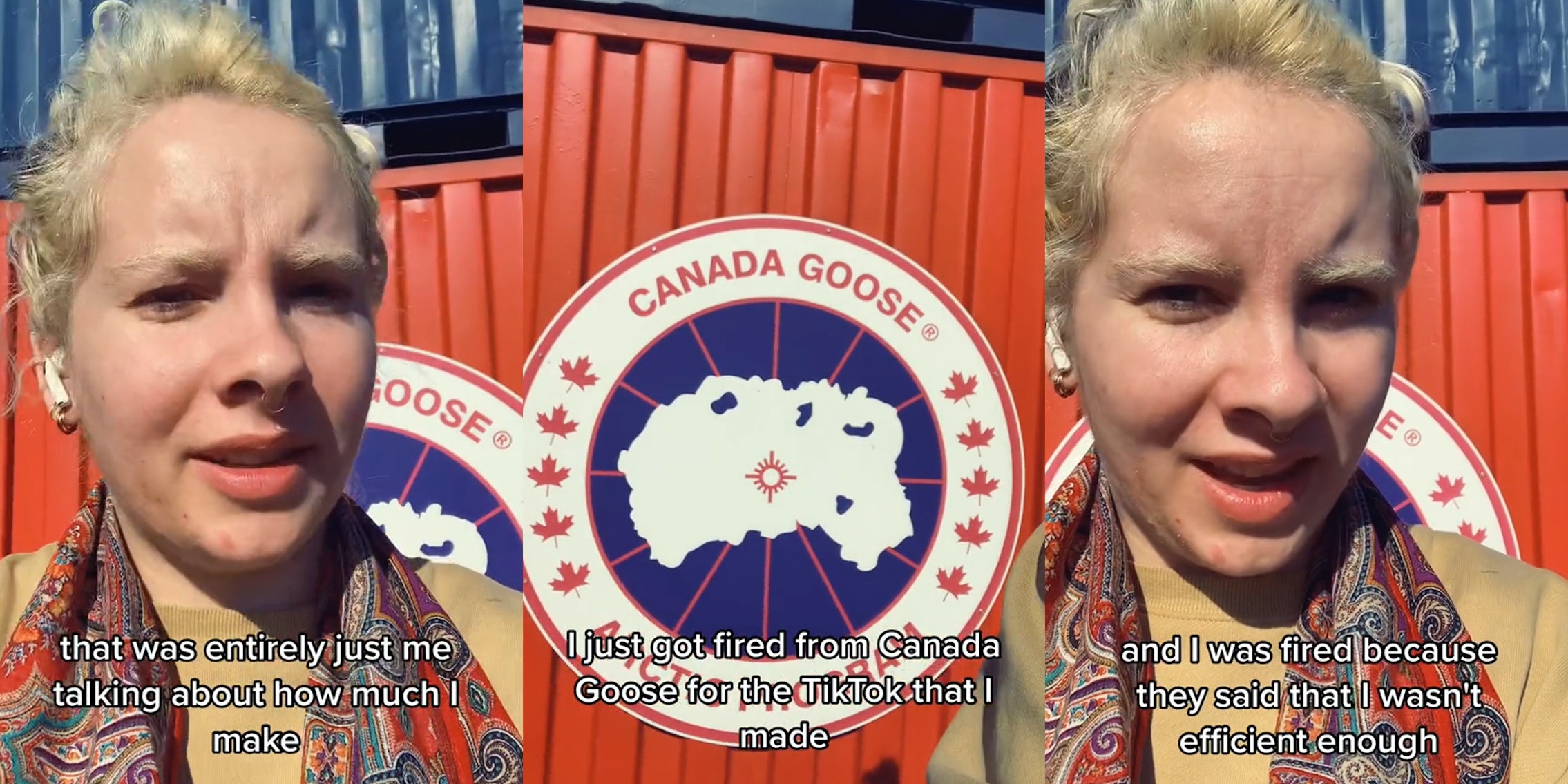 ‘They said that I wasn’t efficient enough’: Woman says she got fired from Canada Goose for talking about her salary online

'I would have to sew 300% faster to make a penny over minimum wage.'

Toronto-based TikToker Chantal Belisle (@the_flying_yak) has gone viral after claiming that she was fired from Canada Goose after sharing her salary online.

Initially, Belisle sparked discussion after posting a series of videos related to her experience working as a sewing factory worker for the winter-wear company. Over the course of several videos, she detailed a stressful working environment that included little training, overly-high efficiency expectations, and a minimum wage that left little room for improvement.

As a result of these videos, she says, she was fired. The video discussing her firing currently has over 1.5 million views as of Sunday.

“I just got fired from Canada Goose for the TikTok that I made that was entirely just me talking about how much I make,” Belisle explains in the video. “I was fired because they said that I wasn’t efficient enough, which is not true, and I didn’t really push it because I was thinking about quitting anyways, because this job is bullshit.”

In the caption, she adds, “@CanadaGoose just fired me for speaking out against how little they pay their factory workers…i will be posting more about their wages.”

If Belisle’s claim is correct, Canada Goose could face legal issues, though proving that public discussion of wages was the true reason for her firing may prove difficult.

“There is no specific law in Canada that prevents employees from publicly discussing their salary or compensation. Therefore, it’s not illegal for a worker to share how much income they earn from their job,” writes Canada-based law firm Samfiru Tumarkin LLP.

That said, “If sharing your salary or income publicly has the potential to cause harm to the company, it’s possible that they could fire you for just cause,” the site states, though the website continues that “this outcome is relatively unlikely.”

Furthermore, all of these issues become more complicated if the worker is in a union, which Belisle claimed in the comments of a previous video that she was.

In a follow-up video, Belisle shows her earnings from sewing for Canada Goose.

This video reveals that Belisle was making around minimum wage ($15.50 CAD) for her work at Canada Goose. As many commenters pointed out, a new parka from Canada Goose can cost around $1,000 to $2,000 USD.

While Belisle says in a follow-up TikTok that she was not surprised that she was fired given the content of her videos, she also affirms that using her platform to share her wage was the right thing to do.

These videos had many users online upset with Canada Goose.

“I was looking for a winter jacket, good to know what to skip over now!” a commenter claimed.

“Well done! People need to start talking more about their wages & consumers need to make educated decisions about how they want to spend their $,” another another.

“I think you did the right thing. Thank you for sharing the information,” a third user agreed.

Thankfully, Belisle says in another video she now has another job in the garment industry. As she wrote in the caption, “@CanadaGoose firing me means i now make .50$ more hourly and have a much shorter commute. Win-win.”

Update 2:00pm CT, Nov. 30: In an email to Daily Dot, Canada Goose offered a statement from the brand:
“At Canada Goose, we believe pay transparency is essential to establishing respect and trust within our teams and provide a clear understanding of what goes into our pay structure and how to achieve accelerations within it. Our manufacturing facilities employ more than 20% of the nation’s cut and sew workforce. Many of them, including our factory workers in Toronto and Winnipeg, are represented by unions who work alongside us to protect and maintain employee interests.

We take pride in the workplace we offer, the talent we employ and the investment we place in paid training which equips many unemployed, underemployed and immigrant community members with in-demand skills and job opportunities.”

The Daily Dot reached out to Belisle via Instagram direct message.