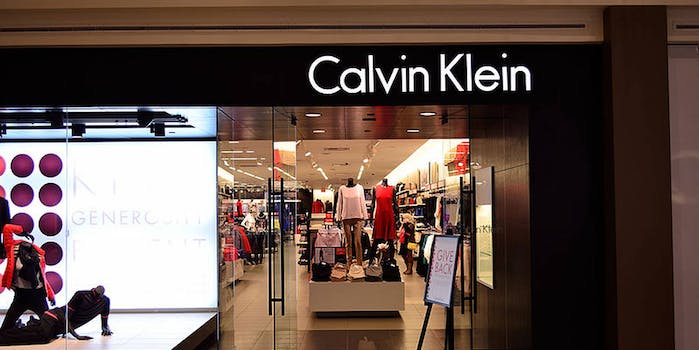 Is it fashionable or predatory?

Calvin Klein knows sexy, and according to the fashion house, sexy is…upskirt shots. You know, like the kind that the creepy guy on the subway tried to take of you on the first day it was warm enough to wear a skirt last spring. You know, like that! Sexy!

Take a peek: @karate_katia, photographed by @harleyweir for the Spring 2016 advertising campaign. #mycalvins

The company posted the new ad, featuring model and actress Klara Kristin, to its Instagram page two days ago with the caption “Take a peek.” Because of the angle in which it was taken, the shot is reminiscent of “upskirt” photos, which is the practice of taking a photo up a woman’s skirt or dress, without her knowledge or consent. In fact, earlier this year a former Comcast executive pled guilty to taking such photos on a commuter rail.

Kristin is in her 20s, so there is no risk of a child pornography scandal, as there was when 15-year-old Brooke Shields posed for the company in 1980. But many are accusing the ad of portraying “upskirt” photos with a positive spin. “It’s trying to normalize pervy and rapey attitudes that have been violating regular women for ages,” says Instagram user smritimurali123.

However, others say that the only thing different between this and other CK ads is that the model is wearing a dress over her underwear, and if the model is OK with the shot, we should be too.

And indeed, the rest of CK’s Instagram shows no shortage of men and women nearly nude. But context matters, and culturally, shots like this are often taken by sexual predators.

The Daily Dot reached out to Calvin Klein for comment, but hasn’t heard back as of this posting.