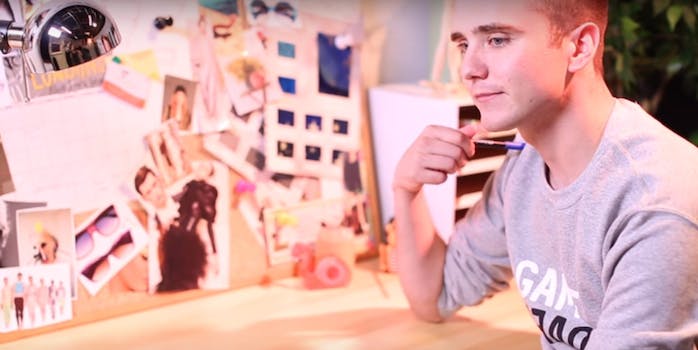 What we must learn from Calum McSwiggan

Calum McSwiggan wants you to believe him. On Wednesday, the LGBT lifestyle vlogger was charged by Los Angeles police for filing a false report after authorities say he faked a hate crime outside of the Abbey, a popular West Hollywood gay bar. While in town for VidCon, the annual online video conference held this year in Anaheim, McSwiggan claims that he was “beaten by three guys.”

As McSwiggan wrote in a Facebook post: “The authorities should have been there to help and protect me but instead they treated me like a second class citizen… With three broken teeth and six stitches in my forehead, I’ve never felt so terrified to be a gay man in the public eye.”

Local law enforcement claim, however, that McSwiggan didn’t appear to have any injuries from the alleged altercation. Instead the YouTuber was booked on charges of vandalism, stating that he was responsible for doing damage to a parked automobile. While in custody, police claim that he faked his injuries, strangling himself with a payphone cord and beating himself in the face with the receiver. McSwiggan maintains that he was doing it to get help—because authorities wouldn’t take him to the hospital.

“I find it shocking… that there is not a system in place to protect victims,” McSwiggan has said in response to the charges. “Victims should be given the benefit of the doubt and allowed immediate medical advice and council [sic] in a crisis.”

McSwiggan’s case is complicated. Should he be found guilty, he faces a $20,000 fine for vandalism, as well as up to 364 days in jail. But if he’s acquitted, this would be merely be the latest indication of how poorly law enforcement handles hate crimes.

While hate crimes have decreased overall in recent years, LGBT people remain disproportionately targeted for identity-based violence. A recent survey from the New York Times found that queer individuals are more likely than any other group to be the victim of a hate crime. Over the course of their lives, up to a quarter of LGBT-identified people will be threatened, bashed, or murdered because of their sexual orientation or gender identity.

The most at-risk populations in the LGBT community are people of color, particularly transgender women. In 2015, 22 trans women were killed across the United States, a majority of whom were black or Latino, and that rate has not slowed down this year. As of June, the Advocate reports that 14 more lives were taken.

Despite this high rate of violence, just 17 states (and Washington D.C.) have laws on the books that offer hate crime protections both on the basis of sexual orientation and gender identity. Five states, including Georgia, have no hate-crime legislation on the books whatsoever. When a same-sex couple in Atlanta were attacked by a man who threw boiling water on them while they were sleeping, the state itself couldn’t prosecute the crime as an act of anti-gay hate. Local law enforcement had to wait for federal authorities to intervene.

Across the country, many of these cases will never be brought to the attention of federal prosecutors. A 2016 investigation from the Associated Press found that 17 percent of local precincts failed to report a single hate crime between the years of 2009 and 2014. According to the Chicago Tribune, more than half (52 percent) of local law enforcement agencies in Indiana reported absolutely no hate crimes over a five-year period—whether in terms of race, sex, sexuality, or gender identity. States like Nevada and West Virginia, where 30 percent of precincts failed to report, didn’t fare much better.

This lack of efficiency has led to an environment where very few hate crimes are reported to police to begin with—because LGBT people expect their cases will be mishandled or suppressed. In 2012, the Bureau of Justice Statistics found that over the past eight years, 60 percent of victims failed to bring their cases to authorities. Last year, the National Coalition for Anti-Violence Programs found that number remained unchanged in recent years.

Other than department mismanagement, there’s another reason that the majority of LGBT victims don’t pick up the phone to call the cops after they are targeted for harm: Police commonly blame them for the attack, accuse them of lying, or further victimize them. “For those survivors who did report to police, 80 percent indicated that police responded to them with either indifference or hostility,” the NCAVP reports. “Survivors also reported experiencing other forms of police violence including verbal abuse, physical violence, and the use of slurs or other biased language.”

After Shagaysia Diamond, a 38-year-old trans woman living in New York, called the police during a domestic dispute, she told the New York Times that police blamed her for the incident. She was thrown into a jail cell with men, subjected to a strip search, and routinely berated with transphobic epithets, including “tranny” and “he-she.” “I felt totally voiceless,” Diamond told the Times, “like I wasn’t even human.”

Fixing America’s hate crime reporting problem is about more than providing accurate data to federal authorities. It’s about showing LGBT victims that their voices, stories, and lives matter and that they deserve to be protected from harm, just like everyone else. By creating a system where victims aren’t believed, law enforcement is only encouraging a culture of silence—in which even more people will neglect to speak up about the violence and harassment they experience.

You might think McSwiggan is lying. He very well might be. But countless numbers of innocent victims have their claims dismissed and disregarded every year, and they deserve our trust and our support.