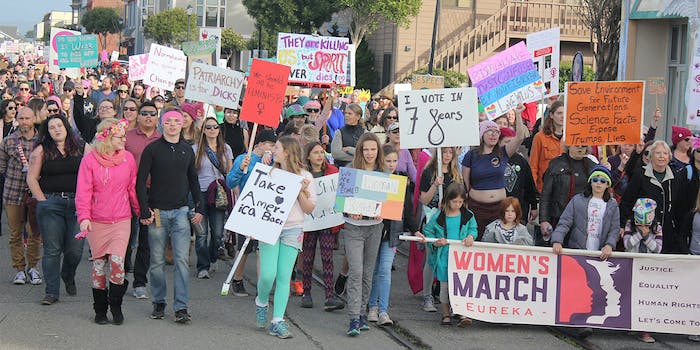 The event is being hindered by controversy and infighting.

A Women’s March rally in Humboldt County, California, has been canceled for being “overwhelmingly white.”

“Up to this point, the participants have been overwhelmingly white, lacking representation from several perspectives in our community,” an announcement by one Beth Ann Wylie read in a California Women’s March Facebook group on Friday. “Instead of pushing forward with crucial voices absent, the organizing team will take time for more outreach.”

The announcement received a mix of responses. While some applauded it and called for greater inclusivity for women of color, transgender people, and sex workers, others were confused. A user named Terri Selfridge shared their many thoughts in all-caps and with numerous exclamation marks, “I will say no more. I support and respect ALL WOMEN and their choices!!”

Another user named Caterina Kein expressed their concern regarding the tone of the message. “I have deep concerns that people of color are being used as a crutch for the organizing committee failing to do the work it takes to encourage diversity,” they wrote. “The planning committee was colonized from the beginning. If you had reached out to community experts of color in the first place and made it a safe space this would not have happened.”

This isn’t the first time the Women’s March movement has been criticized for its lack of inclusivity, though the decision to entirely cancel a march, for this reason, is likely unprecedented.

The Women’s March first took place in January 2017 as a response to the election of President Donald Trump. Though initial criticism was a lack of inclusivity, it’s recently been mired in controversy. At least one of the organizers, Tamika Mallory, has been closely associated with Louis Farrakhan, a leader of the Nation of Islam (NOI), who’s explicitly spewed anti-Semitic rhetoric. NOI has been categorized as an extremist group by the Southern Poverty Law Center.

Farrakhan, who has on the record glorified “Hitler’s evils against Jewish people,” remains at the center of this controversy, largely due to Mallory’s continued defense of her association with him. Last month, Women’s March founder Teresa Shook called for the resignation of organizers Mallory, Linda Sarsour, Bob Bland, and Carmen Perez for “steering the movement away from its true course.” A day later, Sarsour apologized for not being “faster and clearer in helping people understand our values and our commitment to fighting anti-Semitism.”

The damage seems done. Last week, the New York Times reported how Vanessa Wruble, a Jewish woman and one of the organizing members of the original Women’s March, has since been “pushed out.”

The Humboldt County announcement, along with the most recent controversy, comes at the heels of the third nationwide Women’s March, scheduled for Jan. 19. Owing to the recent controversies, New York will see two different marches next month—one by the national chapter of the Women’s March, and another one by an organization co-founded by Wruble, called “March On.”

Since Wylie’s announcement on Friday, the Facebook group of Californians has seen other users post on the issue. Selfridge, who engaged in a few comments in the original post, wrote in the group on Sunday evening, insinuating that a march might be informally organized, “We REGROUP and MARCH There are 20 days to pull this together, IT CAN BE DONE!! We literally have the eyes of the nation focused on this, we must persist!”

Selfridge did not respond to the Daily Dot’s request for comment.