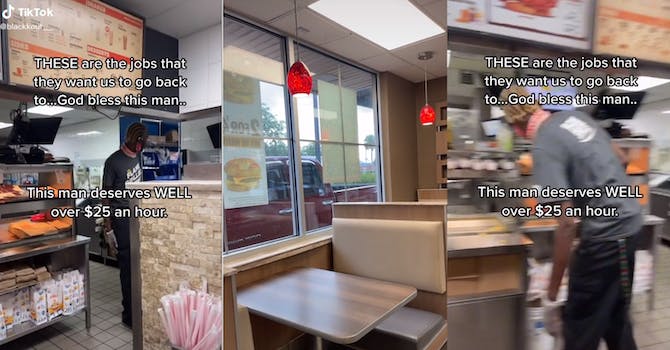 ‘Y’all need to up his pay’: Viral TikToks show a sole Burger King employee running the entire store and drive-thru

In TikToks posted last week, a Burger King employee is seen taking orders at the counter and in the drive-thru lane, preparing food all by themselves.

@1trayday goes on to say that Burger King should be ashamed that one employee is manning an entire franchise and that if they were in his position, they would have “walked out.”

In a follow-up video, posted two days later but taken the same day as the original according to @1trayday’s caption, the TikToker shows that the drive-thru line now wraps around the entire building and that there is a McDonald’s directly across the street from the store they’re filming in.

Commenters on the original video agreed.

“Gotta pay him for each position he’s filling AND time and a half,” wrote @sirpipeknight.

@starlight84 called the employee’s “dedication” abuse. “They won’t give him a raise either & customers will mistreat him for something he can’t help.”

And the Burger King employee doesn’t seem to be alone in his struggle. A recent Daily Dot report on labor movements across the country found that employees from companies like Uber and Juiceland are being overworked and underpaid. Many are organizing via social media to fight for more equitable working conditions and rates.

Though many in the comments of @1trayday’s second video were confused why they were posting multiple videos of the Burger King worker.

“I would jumped back there n helped him,” wrote @12sagittarius84.

@1trayday said they did offer to help, but the employee said he’d get in trouble if surveillance cameras caught them behind the counter.

“Burger King, tighten up,” says @1trayday in the second video. “Get it right.”

@1trayday did not immediately respond to the Daily Dot’s request for comment via TikTok comment. The Daily Dot has reached out to Burger King.