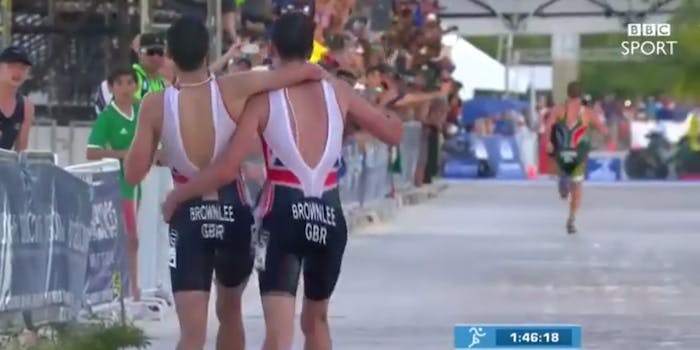 Is it too much of an understatement to say triathlons seem hard? Triathlons seem hard. There is an entire section of YouTube devoted to people’s bodies just giving up at the end of them. That’s what was starting to happen to Jonny Brownlee at the World Triathlon Series in Cozumel, until his brother, Alistair, helped him over the finish line.

In the video, Jonny looks dazed, and commentators note that he’s “losing his sense of direction.” At one point, he pauses by the side of the track, at which point his brother, who is also competing, turns the corner and offers him support. The two run together toward the finish line, and Alistair pushes Jonny across. Jonny ended up winning second place.

Jonny tweeted later that he is OK—from a hospital bed. He also thanked his brother for his help, and joked about his dehydration.

Not how I wanted to end the season, but gave it everything. Thanks @AliBrownleetri, your loyalty is incredible pic.twitter.com/6uG4QiIgfS

Normally when you have had too much to drink. This time it was the opposite #ouch https://t.co/1BVn7evdso

We just hope Jonny got some Gatorade.