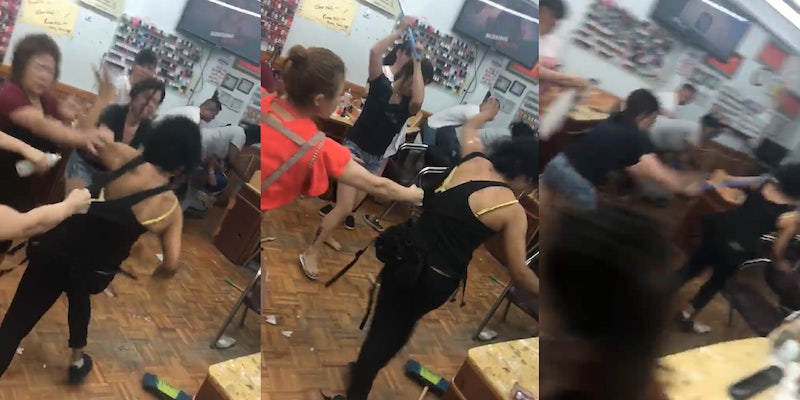 On Monday, protesters picketed outside a nail salon in Brooklyn, New York, after a video went viral showing salon employees physically attacking a Black woman and spraying her with acetone.

The dispute became physical; a viral video posted by bystander Mercy Maduka shows the employees holding onto Thomas by her shirt while another employee sprays what appears to be acetone nail polish remover on her. When Thomas breaks free and tries to flee for the door, another employee can be seen bashing her in the back with a mop or broom handle. After Thomas gets out, the video shows employees attacking other Black women in the shop, one of whom is being restrained and held in place by a man.

Protesters gathered outside the nail salon Monday to demand its shut-down, and to remind their community of the power they have to decide what operates in their neighborhood. According to the Root, the several dozen protesters were chanting “Black dollars matter” and “no respect, no business.”

“Anytime a store doesn’t respect us, we’re going to shut it down,” said Gavin Gibbs, one of the protesters and a resident of the neighborhood, told the New York Daily News. “We will come, we will picket it and we’ll do whatever we have to close your store down.”