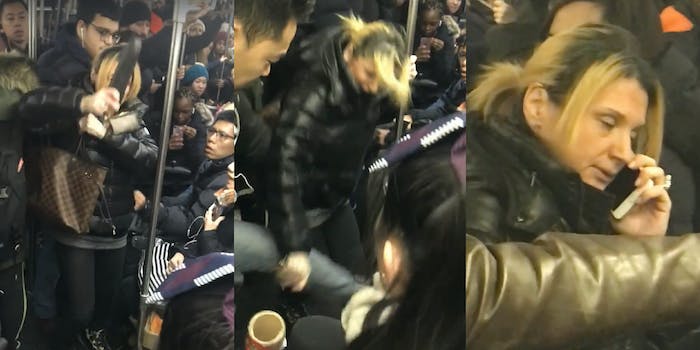 The victim says she’s grateful that there were people on the train who helped her.

A viral video captured on a train in Brooklyn, New York, this week shows a white woman assaulting an Asian woman and yelling racist insults shortly before being arrested.

Around 8:30am ET on Tuesday morning, the altercation started when 40-year-old white woman Anna Lushchinskaya reportedly bumped into a 24-year-old Asian woman. Instead of saying “excuse me,” she took incredible offense and started yelling at the young woman.

In a video of the incident posted to Twitter, Lushchinskaya can be seen yelling “fuck off!” repeatedly in the young woman’s face while she avoids eye contact and does not respond. Lushchinskaya then slaps at the young woman, who finally responds by stomping back. They have a quiet back and forth and Lushchinskaya suddenly starts taking off her accessories, takes out her umbrella, and ties up her hair. Then, without warning, she winds up and kicks at the young woman who kicks back in self-defense. As people try to stop it from escalating further, Lushchinskaya yells, “they’ree not letting me hit her back!”

She yells at the young man trying to block her, then keeps trying to kick under him and swing at the woman with her umbrella handle. People on the train look shocked as she keeps trying to hit the young woman, and the man recording the video says, “She’s not even fighting back.”

As Lushchinskaya extends the umbrella and starts more aggressively hitting the victim, a man intervenes and pulls it out of her hands. She fights back and yells, “What the fuck are you doing?” After her umbrella is out of her hands, the man calmly explains to her that everyone on the train witnessed her intentionally attacking the young woman, and encourages her to call the police. She calls him a racial slur, and the train erupts.

Juan Ayala, who posted the viral video, was recorded by another person confronting Lushchinskaya. When she yells, “What are you, her attorney? You piece of shit, fucking Mohamed Atta?” Ayala laughs and says, “Bitch, I’m Dominican.” For a moment things look like they might turn nasty again when she slaps his phone out of his hand and Ayala tackles her to the ground, but instead, he simply held onto her and waited for the police to arrive.

The young woman who was attacked spoke to ABC 7, choosing to stay anonymous. “I’m lucky that she didn’t have anything like weapons on her—like knife, gun—because it could have got a lot worse,” she said to ABC 7. “I’m lucky that people were on the train who were helping me.”

Lushchinskaya was arrested and charged with menacing in the second degree, criminal possession of a weapon, attempted assault, menacing, and harassment, according to ABC 7.