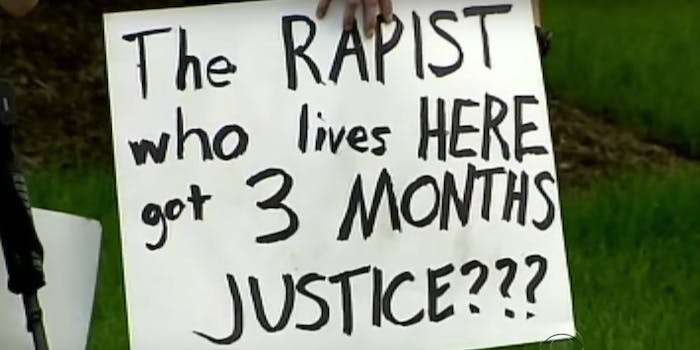 Welcome back to the neighborhood, Brock.

On Friday morning, Brock Turner was released from Santa Clara County jail after serving three months of a six-month sentence. The convicted rapist and ex-Stanford swimmer was allowed to walk free due to good behavior, and he headed back to his parents’ home in Sugarcreek Township, Ohio.

Needless to say, neighbors and members of the Dayton suburban community aren’t exactly welcoming Turner back with open arms.

#BrockTurner may have gotten a light sentence but the neighbors not making it easy for him to live outside of jail pic.twitter.com/k4DXAF7AY2

Protesters wrote “rapist” in chalk with arrows pointing to the home. Some carried signs; others carried guns. A neighbor interviewed by CBS News summed up the general sentiment: “He’s not welcome.”

WCPO caught up with protesters, who made it clear that Turner’s light jail sentence doesn’t mean the disgraced college student will have an easy life as he begins three years of probation.

“If he is uncomfortable, then he begins to receive at least some punishment that he deserves for his crime,” one protester said. Law enforcement is wholly unsurprised by the demonstrators and is expecting more protests in days to come.

Turner has five days to register as a sex offender. Even then, authorities will be watching.

“We will go down to his house where he is living to confirm he is living there. We will pop in unannounced from time to time to make sure he’s living where he says he’s living,” Greene County Sheriff Gene Fischer told WHIO.

The fire department reportedly washed away the chalk messages outside Turner’s house on Friday night. Public sentiment against him remains.