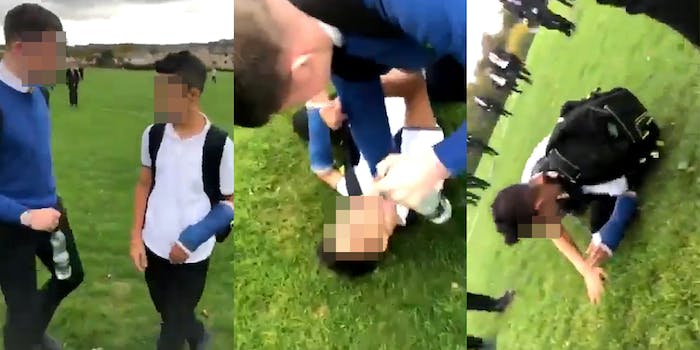 People are responding with outrage and compassion as a viral video of a 15-year-old Syrian refugee being bullied at school has quickly spread across the internet.

According to a GoFundMe started in response to the viral video, the young Syrian refugee in the video is named Jamal. He and his sister have been attending school in Huddersfield, England, where they’ve reportedly both been the subject of bullying so severe that Jamal’s sister tried to take her own life at school.

The video shows Jamal, his arm in a blue cast, walking in a field outside of school. An older, larger, white student approaches him and starts kicking at his legs. Jamal tries to back away, but the older teen grabs him by the neck. He forces Jamal to the ground and continues to choke him, then pours water over his nose and mouth, saying, “I’ll drown you!”

The attacker cannot be identified for legal reasons, as he is only 16-years-old, but West Yorkshire Police have confirmed that he has been charged with assault and will appear in youth court. The attacker was identified by people on social media, however, and it was uncovered that his mother appeared in court in 2017 for threatening a Middle-Eastern man, and his brother was jailed in 2016 for racially motivated violence. Police are reportedly guarding the teen’s home as his address was shared online.

The GoFundMe started to support Jamal and his family has been up for less than a day, and already has raised over £80,000 ($102,000). “Having left a war torn country, the least they deserve is to live in peace without being harassed,” reads the campaign story. “Please donate generously and let’s change this horrible situation into a blessing in disguise for them.”