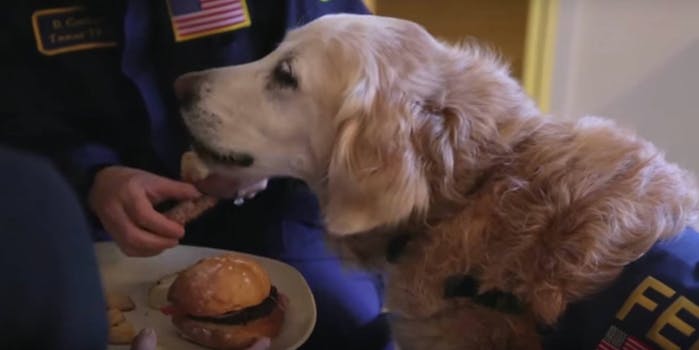 She lived a full life of service and support.

Bretagne, the last living search dog who served at Ground Zero after the Sept. 11, 2001 terrorist attacks, was euthanized in Houston on Monday. She was 16.

Her owners, Denise and Randy Corliss, took her to Fairfield Animal Hospital, where she was given a salute from members of Texas Task Force 1, the Cy-Fair Volunteer Fire Department, and other agencies as she walked into the hospital.

Hospital workers draped an American flag over Bretagne (pronounced “Brittany”) as they moved her body. She’ll be transported in a formal procession to Texas A&M University, where an autopsy will be performed.

Bretagne the last surviving 9/11 search dog at Ground Zero was saluted before being laid to rest #TrophyHighTues pic.twitter.com/GbtwBsnDli

“This was a very small way for us to pay tribute to a dog who truly has been a hero,” Cy-Fair Volunteer Fire Department Captain David Padovan told Today. “Just because she’s a K9 doesn’t make her any less part of our department than any other member.”

Bretagne was one of 300 dogs that searched through the rubble at Ground Zero in the days after the terrorist attacks in New York. When she was two years old, she and her handler Denise Corliss worked 12-hour shifts to locate survivors and remains. Over the years, they were part of search teams for Hurricanes Katrina, Rita, and Ivan, as well as a number of other disasters.

Bretagne retired as a search dog at age 9, but she still lived an active life full of adventure and helping others. She volunteered at a Texas elementary school as a reading assistance dog, met former President George H.W. Bush, and was the subject of a book about senior dogs. She also made headlines when she visited Ground Zero at age 15 with Corliss for the first time since 9/11, and the internet collectively fell in love with Bretagne as she celebrated her 16th birthday in style in New York City.

People were quick to express their condolences as they learned of Bretagne’s passing.

It is with heavy hearts we say goodbye to the last surviving 9/11 search dog, Bretagne. You will be missed. https://t.co/RxOoLuzgGW

The last living 9/11 rescue dog has passed away. Texas & America are forever grateful for Bretagne's servicehttps://t.co/w8uFJDiMuk

A heroes farewell to 'Bretagne', the last 9/11 search and rescue dog. https://t.co/axrZJJzpzu pic.twitter.com/6MT3lU3Ox2

With Bretagne’s death, all of the search dogs who helped during 9/11 are gone. Previous reports on the celebration of Bretagne’s 16th birthday mentioned Morgan, a 16-year-old English springer spaniel stationed on Staten Island, as the only other remaining search dog, but she died earlier this year, according to the Penn Vet Working Dog Center.