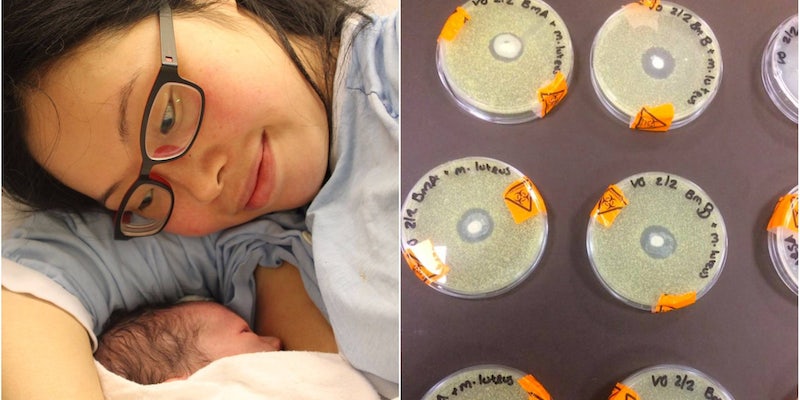 If you’ve ever opened a parenting book or clicked on a mommy blog, you know there is a lot to be said about breast milk. Much of it touts how perfect it is while ignoring that formula is just fine and that many mothers can’t breastfeed or keep up with pumping when they go back to work.

But absolutism and lactation elitism aside, breast milk is pretty cool, not only as a complete food, providing all the nutrients a baby needs for the first six months of life, but also as a disease and germ-fighting agent.

Biosciences student Vicky Greene recently proved this latter part by adding breast milk, from mothers feeding kids ages 15 months to 3 years old, to nine Petri dishes filled with M. Luteus, a bacteria that colonizes in the mouth and upper respiratory tract. And what she found was that where the milk was placed in the dish the bacteria had been killed off.

Greene, whose post has gone viral with almost 20,000 shares, said that the experiment also worked with E-coli and somewhat with MRSA, an infection caused by a type of staph bacteria. Her study also shows that breast milk’s immunization properties don’t diminish the older the breastfed kid gets.

Previous studies have shown that breast milk also has the ability to cure 40 types of cancer because it contains a special substance called HAMLET (Human Alpha-lactalbumin Made LEthal to Tumour cells). It’s also a pretty neat self-regulator, adjusting its immunological composition based on your baby’s backwash (yes, for real).

The human body is a magical thing—and yet not every body is the same.