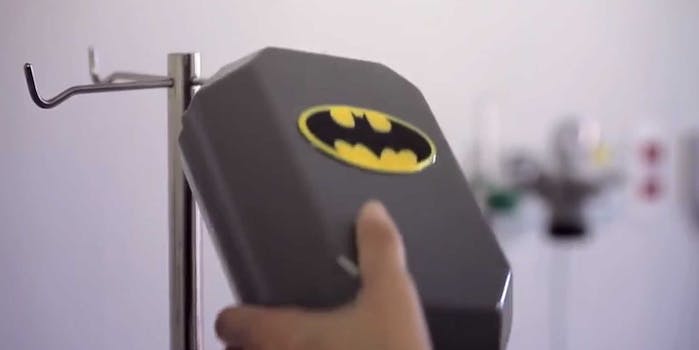 Kids with cancer join the Justice League at one Brazilian hospital

At a Brazilian children’s hospital, cancer is no match for the Justice League.

To do this, JWT devised the “Superformula,” a series of covers for intravenous bags used during chemotherapy that are colorfully decorated with icons of the Justice League—Batman, Superman, Wonder Woman, and the Green Lantern.

Like any good comic book story, the Superformula needed a solid origin story, so JWT gave it one.

“To give these covers a more powerful meaning, we started to produce a special series of cartoons and comic books in which the superheroes go through experiences similar to those of kids with cancer, and recover their strength, thanks to this ‘Superformula,'” the ad agency explains in the YouTube video description.

Finally, for even more added effect, the game room at the hospital was converted into the “Hall of Justice.”

By JWT’s own account, the idea has been successful in “helping the children in their own struggle against one of the real world’s greatest villains.”