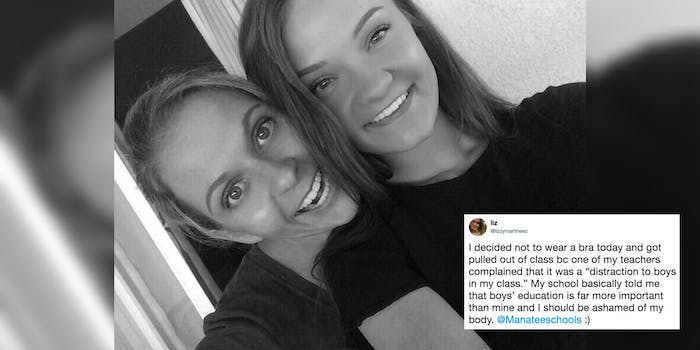 School officials made her jump up and down to see how her breasts moved.

The internet is standing in support of a Florida high school student after she was shamed for “violating” the district’s dress code.

On Monday, BuzzFeed News reported that 17-year-old Lizzy Martinez was made to leave class at Braden River High School last week because she chose to wear a long-sleeve shirt without a bra. She was told by officials that her third-period teacher had reported her going bra-less and that a student later came to the office to do the same.

In addition to being told that nipples and breasts were “distracting” to other students and that “a boy was laughing at her,” Martinez said school officials made her put on a second shirt and jump around to see how her breasts moved, and then was given four Band-Aids to put over her nipples.

“They told me to cross out my nipples and I just went to the bathroom and cried,” Martinez told the publication. “I was in shock that it was such a big deal that I wasn’t wearing a bra. Most days I don’t wear one. It depends on my mood. I’m not wearing one right now, and why should it matter?”

That day, Martinez shared her story on Twitter, tagging the School District of Manatee County, Florida. She tweeted a second message to her school, tagging its account with the phrase “Stop sexualizing my body,” and was blocked by the school’s account the following day.

I decided not to wear a bra today and got pulled out of class bc one of my teachers complained that it was a “distraction to boys in my class.” My school basically told me that boys’ education is far more important than mine and I should be ashamed of my body. @Manateeschools :)

*school has student put bandaids over her nipples because it is a “distraction” then blocks them for calling them out on sexualizing her* :/ pic.twitter.com/x8dEDYjh2c

Martinez’s mother, Kari Koop, told BuzzFeed News that she was livid to find Martinez had been removed from class “because a teacher or a boy was uncomfortable or laughing at her.”

“It’s a disgusting example of a double standard and shows how our culture body-shames women. If a boy was staring at her nipples that long why was he not spoken to or punished?” Knop told the publication.

In meetings with the school, Knop said the principal acknowledged “she didn’t see anything wrong” with Martinez’s attire, leading Knop to conclude that her daughter was unfairly targeted for attire that didn’t violate the school’s dress code—the district dress code doesn’t even specifically mention bras and undergarments, the publication pointed out.

In a statement addressing Martinez’s treatment, Mitchell Teitelbaum, the district’s general counsel, wrote that “it is undisputed that this matter should have been handled differently,” but that there was “a violation of the School Dress Code and it was an appropriate matter” for the school to address. Knop said officials told her the district will be amending its policy to require bras and undergarments, though Teitelbaum told the Bradenton Herald on Friday that it was unclear if the code would change.

Across Twitter, Martinez’s supporters, celebrities included, have slammed the school’s reaction to her body, and have shared words of encouragement with the high schooler.

Boys could – WAIT FOR IT – control themselves! pic.twitter.com/cINRHtLQin

Liz, I'm so sorry that "adults" embarrassed you and devalued your education. We, as a society, take girls out of the classroom, shame them for their bodies, all while expecting so little from our boys and sending damaging messages to everyone. #everydaysexism #rapeculture https://t.co/4w0ioqdpZn

My mother had large breasts and refused to wear a bra. I’m so saddened by adults shaming young women bc of their human bodies. Society making women’s bodies taboo is how bad shit happens (usually alongside the demise of democracy, hmm) https://t.co/dq0QJg8ZN9

Meanwhile, Martinez has yet to return to school because she feels uncomfortable going back to the class of the teacher who complained about her breasts, but she’s planning a protest to push back on the school’s “outdated views.”

“It’s very uncomfortable for people to talk about but this is a big issue that a lot of girls feel targeted and sexualized and have to live up to a standard of what we have to look like and wear,” Martinez said. “So I’m just going out and putting myself out there and starting this conversation because we obviously still need to have it.”