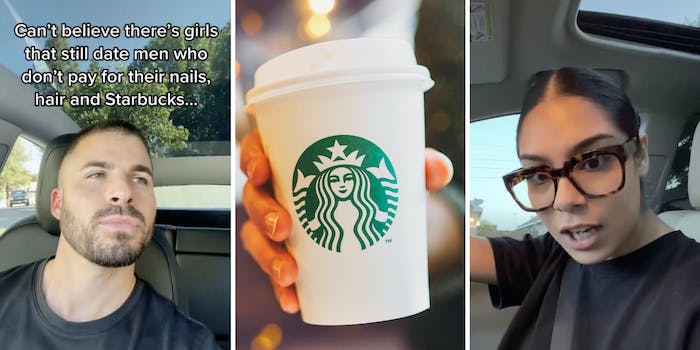 Woman says ‘you don’t even get a talking stage’ if man doesn’t pay for her Starbucks, sparking debate

'He's not your husband.'

A woman on TikTok says she doesn’t allow men to get to the talking stage unless they pay for her Starbucks.

The woman, known as Ray (@evelynrayblog) on TikTok, shared her dating rule while stitching a video from another TikToker (@trentonacrey). The latter TikToker said he can’t believe some women still date men who don’t pay for their nails, hair, and Starbucks.

Apparently, Ray couldn’t believe that either. For her, it’s a minimum that men pay for her coffee order.

“Baby, you don’t even get a talking stage if I’m talking to you and I’m telling you that I’m on my way to grab some coffee and you don’t Zelle me or ApplePay me $10,” Ray says in the video. “That’s it, you’re done.”

Ray’s video, which garnered about 172,000 views as of Wednesday, sparked mixed reactions from viewers.

Some women commented that they agree with the TikToker, saying her dating rule is the bare minimum.

“No cause facts!!!!!” one viewer commented on the video.

“And 10 is the minimum lol,” another viewer commented.

Other women said they have access to their husband’s or boyfriend’s credit cards or bank accounts, and they send themselves money.

“I just have my mans card on my Starbucks wallet haha,” one user said.

“Married 16 years, I just zelle pay myself from his account and leave it in the notes,” another user wrote.

However, not everyone agreed with Ray.

“My opinion, a boyfriend shouldn’t be paying for all that. He’s not your husband, doesn’t have to support you,” one viewer commented.

Some users said they feel “empowered” being able to pay for their own coffee, hair, or nails.

“I feel empowered knowing i can afford all of that myself without having the need to ask anybody for money,” one user said.

“don’t need a man to pay for anything,” another user wrote.

The Daily Dot reached out to user @evelynrayblog via TikTok comment.