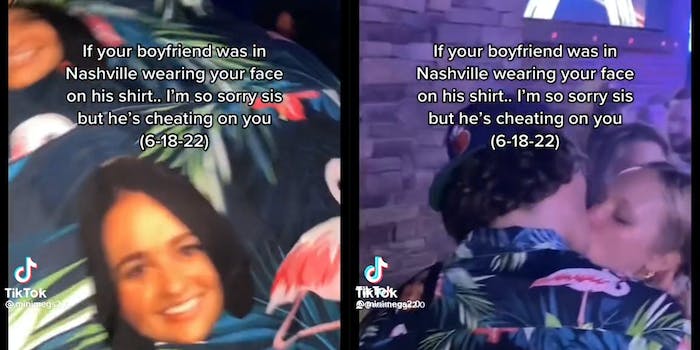 ‘If your boyfriend was in Nashville wearing your face on his shirt.. I’m so sorry sis’: TikToker thinks she caught man allegedly cheating on girlfriend while wearing her face plastered on his shirt

'Boyfriends + Nashville = no thank you.'

A TikToker claims she caught a man cheating on his girlfriend while wearing a shirt that has his girlfriend’s face plastered all over it.

Statistically speaking this isn’t exactly an uncommon occurrence, as some 75% of men and 68% of women have admitted to infidelity, per a 2019 BBC report. However, what’s getting folks really riled up about this particular instance is what the man is wearing in the clip, posted by Meg (@minimegs0).

It appears he’s rocking a short-sleeve button-down shirt plastered with his girlfriend’s face on it as he kisses another woman who is not the woman on the shirt.

The TikTok was apparently posted with the intent to alert the woman presumed to be the man’s girlfriend with a text overlay that reads: “If your boyfriend was in Nashville wearing your face on his shirt.. I’m so sorry sis but he’s cheating on you (6-18-22).”

Folks expressed their shock in the comments section, and it didn’t take long for throngs of TikTokers to work their internet stalking magic to find the woman on the man’s shirt.

“I’m trusting Tiktok to bring me back with answers,” one viewer said.

“Boyfriends + Nashville = no thank you,” another said.

It apparently didn’t take long for the alleged woman on the shirt, aka “Shirt Girl,” to see the video and chime in in the comments section of the post, explaining exactly what went down.

“That’s my fiancés best friend, definitely not the fiancé,” Amber Shchubauer wrote in the comments section. Megs revealed she DMed Shchubauer and posted a follow-up.

“So I definitely didn’t think that we’d be able to find shirt girl, but we did. And it turns out, it is her fiancé’s bachelor party, and there were tons of other dudes. But we were there for ours, and like I said in the comments, didn’t see anyone else. But I DMed her and said, ‘Girl so glad that I found you I’m even more glad that it’s not your man if I would have seen the other guys at the bachelor party I would’ve totally would not have posted this do you want me to delete it,” Megs says.

The TikToker continues, “She said, ‘No, everyone thought it was funny, but yes he is single.’ And I was just posting it because it looked super sketch, super weird, and I would wanna know if that were my husband out there doing that stuff, so, just trying to help a girl out we did find her, not her man. So, good news, all around.”

Many commenters expressed relief that Shchubauer’s fiancé wasn’t the one locking lips with another woman.

“I saw them! There was an entire group of them wearing this same shirt at the food hall,” one claimed.

“I’m so glad it wasn’t her man omg,” another said.

Others presumed this what was going down all along in the comments section of the first clip. “I think he was probably a friend of bachelor bc they are all wearing that shirt,” one initially said.

And while Megs did appear to express a bit of regret for posting the video in the first place, there were folks who said that they appreciated she did so, echoing her sentiments at the end of the clip that if her significant other was out cheating, then they would want to know.

“I think it’s cool you still posted though!” one said.

“Good for you! Gotta watch out for eachother!” another said.

Shchubauer eventually posted a video proving all the groomsmen at her husband’s bachelor’s party wore the same shirt.

The Daily Dot has reached out to both Megs and Amber on TikTok.