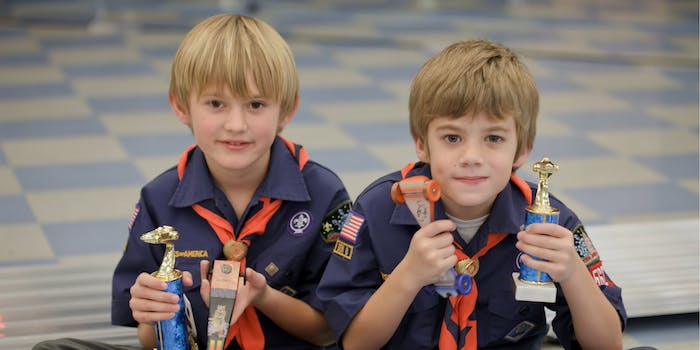 The Boy Scouts of America has announced it will begin accepting girls into its Cub Scout program starting next year, breaking its historic quo of strictly admitting boys into scouting program in order to “nurture female leaders.”

The change, which will go into effect next year, will allow girls between ages 7 and 10 to join the Cub Scout program. According to a statement, “dens,” the smallest groups, will be single-gender, while “packs” have the option to be single-gender or integrate girl Cub Scouts. Programming for older girls will be available in 2019, and will allow them to earn the highest-ranking designation of Eagle Scout.

However, this pivot from the Boy Scouts seems to have bristled opponents of… mixed-gender education? Increased popcorn tin sales? It’s unclear what problem critics of the integration have with the change, but the earliest and most vocal of protests has come from the president’s son, Donald Trump Jr.

“Strange, I thought that’s what the Girl Scouts was for???” Trump Jr. tweeted within minutes of the news breaking.

Strange, I thought that's what the Girl Scouts was for??? https://t.co/8Dhub01Ihi

The Girl Scouts of the USA has its own legitimate concerns for the Boy Scouts’ integration of girls that have little to do gender politics and norms and more with membership. In August, the New York Times reported that Girl Scouts president Kathy Hopinkah criticized the Boy Scouts, accusing it of launching a “covert campaign” to poach girls in an effort to deflate its own declining membership numbers and finances.

However, Hopinkah has since apologized, while the Boy Scouts refute this claim, insisting that families of pre-existing boy members had increasingly asked the organization for options for girls.

Over the past decade, both Boy Scouts and Girl Scouts have fundamentally expanded their criteria for membership. In 2011, the Girl Scouts of Colorado opened its policy to allow a 7-year-old trans girl to be in the program and opened its membership to transgender girls in 2015. Meanwhile, Boy Scouts lifted its ban on openly gay members in 2013, lifted its ban on gay leaders in 2015, and changed its policies to admit trans boys in January.

Trump Jr. might be left scratching his head, but he could at least take his children scouting under one organization while he’s still trying to figure it out. Besides, it wouldn’t hurt Boy Scouts to be around other members who could help promote empathy and collaboration over Trumped-up toxic masculinity.

“We strive to bring what our organization does best—developing character and leadership for young people—to as many families and youth as possible as we help shape the next generation of leaders,” said Michael Surbaugh, Boy Scouts of America’s chief scout executive, said in a statement.