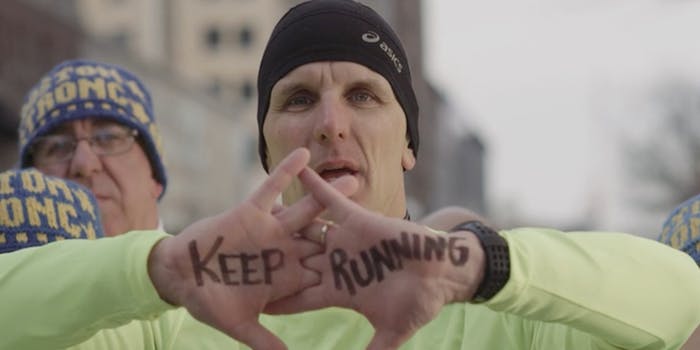 One year ago today, the city of Boston was forever altered after two bombs exploded at the finish line of the Boston Marathon. Yesterday, The Boston Globe was awarded the Pulitzer Prize for their breaking news coverage of the bombing, and today they published an interactive feature profiling the survivors and first responders.

On Twitter, the hashtag #BostonStrong is trending today, in remembrance of those lost and those who survived. This morning, all five major Boston sports teams sent a #BostonStrong tweet at the same time.

We’re all on the same team. #BostonStrong pic.twitter.com/gPqkMEjHl2

A live tribute to the victims was held today, and a moment of silence will take place this afternoon, at 2:49 p.m. ET.

Instead of letting tragedy break you, you made a simple choice – to keep running. #NeverStop #BostonStrong pic.twitter.com/27aTA0Ye03

We honor the survivors, first responders & others who helped in the time of need #bostonstrong @BostonGlobe photo pic.twitter.com/u7OzJ79cFJ

On this day – we remember all those impacted by the attack one year ago. God Bless us all. We are #BostonStrong. pic.twitter.com/QOn6CyZslD

Took this while covering the start of the race at Hopkinton on that fateful day last year. #BostonStrong pic.twitter.com/nsetA8x7rO