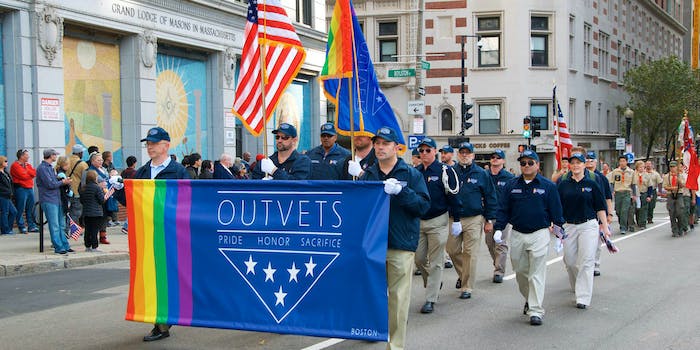 OUTVETS will even lead the parade.

After growing criticism from Boston organizations and Massachusetts politicians, the Boston St. Patrick’s Day Parade has offered a slot to an LGBTQ veterans organization that had previously been uninvited.

According to the Huffington Post, the South Boston Allied War Veterans Council originally voted on Tuesday to exclude the LGBTQ veterans organization OUTVETS from the parade. That decision shattered a two-year precedent of accepting LGBTQ groups during the march. Now, the organization is welcome to join on March 19, and, as NBC Boston reports, will be leading the parade.

“It’s been a long week, [it’s] been a long struggle, but the struggle is now over as we can celebrate true inclusion and diversity in the city of Boston,” OUTVETS CEO Bryan Bishop said to NBC News.

The re-invitation stems partly from mounting backlash across the state. Boston Mayor Marty Walsh (D) and Governor Charlie Baker (R) both rescinded their support for the parade amidst the decision. Stop & Shop removed their sponsorship, too. A Chicago Tribune report reveals that the council originally rejected OUTVETS due to the group’s use of the rainbow flag, because the flag was in “conflict with the overall theme of the parade.” Though OUTVETS displayed the flag for their first two years at the parade, the council argued that the group would only be allowed if it did not display the rainbow symbol on its banner and uniforms. That condition has since been rescinded.

“It’s our identity. You telling us to remove a rainbow is the same as telling us ‘Don’t be gay,'” OUTVETS attorney Deedee Edmondson told the Huffington Post. “They’re saying, ‘You’ve got to look like us.'”

This isn’t the first time that the South Boston Allied War Veterans Council has been in conflict with the LGBTQ community. In 1995, a Supreme Court ruling allowed the council to reject LGBTQ Bostonian groups from the organization, essentially banning their participation. In that ruling, the Supreme Court found that the council could dismiss LGBTQ organizations because the “selection of contingents to make a parade is entitled to First Amendment protection.” In 2015, LGBTQ organizations were finally admitted to march in the parade.