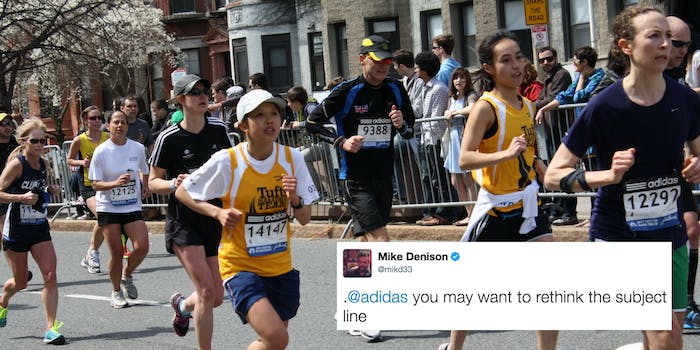 There’s nothing congratulatory about surviving a tragedy. Adidas is learning that the hard way.

The athletic attire company is backpedaling after receiving heat for an email sent to this year’s Boston Marathon runners, congratulating them for “surviving” the race.

“Congrats, you survived the Boston Marathon!” read the subject line of the email sent out Tuesday.

Given the context of a marathon—the arduous 26.2 miles ran over several hours—this subject line probably would have made sense for literally any other race.

But literally “surviving” the Boston Marathon, specifically, is nothing to joke about or feel accomplished for. In the 2013 Boston Marathon bombing, three people died, 16 others suffered injuries where they lost their limbs, and hundreds of others were injured. None of this year’s participants probably felt particularly accomplished simply for coming out alive.

Twitter‘s running community was quick to point out the major offense.

.@adidas you may want to rethink the subject line pic.twitter.com/curUb8FieO

RIP Adidas. Gonna be trending soon. Nobody even took a second guess at the subject line of this email before releasing it? @adidas pic.twitter.com/ui9WsYtFwk

Adidas apologized just hours after the email was sent, issuing a statement on their social platforms for their insensitive mistake.

“We are incredibly sorry. Clearly, there was no thought given to the insensitive email subject line we sent Tuesday. We deeply apologize for our mistake,” the company wrote. “The Boston Marathon is one of the most inspirational sporting events in the world. Every year we’re reminded of the hope and resiliency of the running community at this event.”

Adidas can only be in hot water for so long, however, until another company or press secretary manages to piss off a large portion of their audience. Until then, Adidas can just look forward to holding the next offender’s beer.