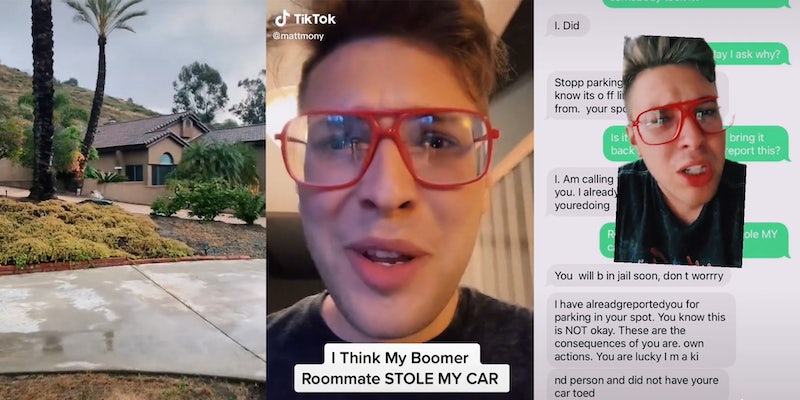 ‘They are unhinged’: TikToker says ‘boomer roommate’ stole his car, threatened to call the cops on him for parking in his own space

'My brain hurts trying to figure out her logic.'

A TikToker says his “boomer roommate” stole his car and threatened to call the police on him because he was parked in his own parking space.

Matt Mony (@mattmony) posted the TikTok on Friday. In the clip, Mony asks audiences if “I should call the cops because I just came outside and my car is not here.” The camera pans to an empty driveway. “Do you see a car there? I don’t see a car there. My car keys are gone and I think my boomer roommate stole my car.”

In a second TikTok posted on Saturday, Mony shares the text conversation between him and his roommate Darlene. “Starts out with a classic, ‘Hey have you seen my car?'” he says in the clip. “Did somebody take it? It’s like talking to a 4-year-old.”

In the text messages, Darlene admitted to taking his car so Mony texted back asking, “May I ask why?”

“And you guys want to know her excuse? It’s because I was parking in my parking space,” he says. “And then the boom flip here is when I was like ‘Hey, can you bring it back so I don’t have to report you?’ She’s like, ‘I’m calling the police on you.'”

“Is it possible you please bring it back so I don’t have to report this?” Mony texted his roommate, according to the screenshot.

“You will b in jail soon, don’t worry,” Darlene texted. “I have already reported you for parking in your spot. You know this is not okay. These are the consequences of [your] own actions. You are lucky i’m a kind person and did not have you [towed].”

“So now I’m trying to figure out based on this nonsense below me, did she actually call the cops on me or is she just being a boomer?” He says.

In the comments, people were confused by the roommate’s actions. “My brain hurts trying to figure out her logic. She literally calls it your spot twice that I can see. That means you should be able to park there.”

“Why have you not moved out yet,” commented someone else.

“They are unhinged.” wrote another.

“Save those texts, she admitted the crime. easy law suit,” commented another TikToker.

The Daily Dot has reached out to Mony via Instagram direct message.