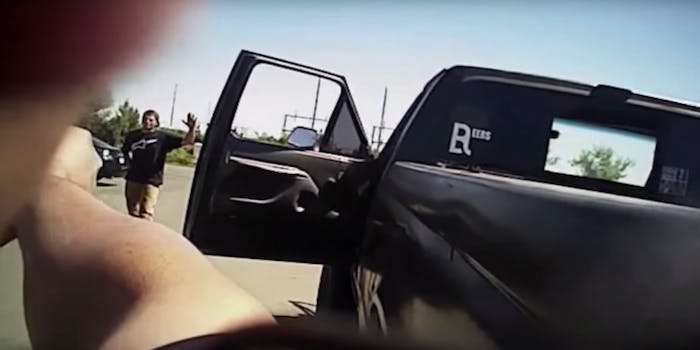 The footage shows Noble repeatedly ignoring police commands—but did he deserve to die?

The chief of the Fresno Police Department decided Wednesday to make public body camera footage from the controversial June 25 shooting of a 19-year-old who failed to comply with police commands.

Dylan Noble died after being shot four times by Fresno police. The officers who pulled him over last month say they were responding to a report about a man with a rifle. After his pickup truck was pulled over, Noble failed to comply with the officers who repeatedly asked him to put both hands out the driver-side window.

“I anticipate that some of this video will answer many of the questions out there in this community,” Chief Jerry Dyer said at a news conference. “However, I believe this video is also going to raise questions in the minds of people, just as those questions exist in my mind as well.”

The video, which Dryer characterized as “disturbing,” shows the 19-year-old repeatedly ignoring the officers’ orders. He sticks one hand out the window instead of two, then exits the video without being prompted. Noble then left the truck a second time, but he did not drop to the ground when ordered. Police are heard repeatedly yelling, “Let me see your hands!”

“I fucking hate my life,” Noble reportedly told the officers after being warned that, if he failed to comply, he would be shot. Noble walked away from the officers momentarily, and then quickly turned around with his right hand concealed behind his back. Chief Dyer said the officers believed at the time that Noble may have held a weapon.

One of the officers fired twice, then once more when Noble was on the ground after his hand moved toward his waistband. A second officer then fires a single shot.

The Federal Bureau of Investigation and the U.S. attorney general’s office have agreed to investigate the shooting, according to the Los Angeles Times. An investigation by the local prosecutor’s’ office is expected to conclude by late August.

According to the Times, one of the officers involved in the shooting is a 20-year veteran with no previous involvement in a police shooting. The other officer, who has been with the Frenso Police about 10 years, was involved in a 2009 shooting of an armed suspect.