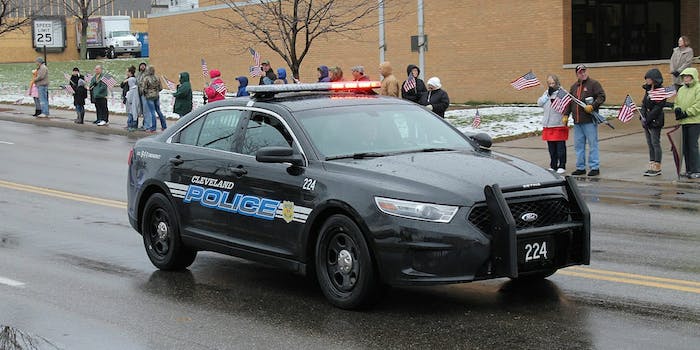 The Cleveland officer pleaded with the suspect while trying to save his life.

Dramatic footage of a police officer being shot in his ballistic vest shows what life is sometimes like on the other side of the body camera.

Released by a Cuyahoga County, Ohio, prosecutor on Wednesday, body camera footage shows the March 11 encounter between four Cleveland police officers and a suspect, who was fatally shot during the encounter. The video was released after the prosecutor, Tim McGinty, cleared the officers of any wrongdoing during the attempted arrest.

In the video, the officers are heard telling 64-year-old Theodore Johnson to drop his weapon. Officer Davis Muniz, who was shot in his protective vest, is heard pleading with the man, “We don’t want to kill you.”

Authorities say the officers were dispatched to Johnson’s home after his wife called 911 and said Johnson had been drinking and threatened to kill her and the couple’s landlord. When the officers arrived, they yelled “police” while climbing the stairs. Johnson stepped out of his door and fired two shots at Muniz, hitting him once in the vest.

“I want to die,” Johnson is heard telling the officers, apparently begging Muniz to kill him. As yelling continues back and forth, Muniz continues pleading with Johnson, who was still armed with a handgun: “We’ll get you some help, my man… I know you shot me, but I’m not going to kill you.”

While standing only a few feet away, Johnson is then seen raising his gun suddenly above his head. Several shots are heard. It’s unclear from the footage who fired which shots, but police say all four of the officers opened fire.

In a letter to Cleveland Police Chief Calvin Williams, McGinty wrote that the shooting was “reasonable and necessary.”

“The Officers in fact showed remarkable restraint,” McGinty said, “and went above and beyond their duty to seek a peaceful end to a situation that would likely have been deadly to at least one officer were it not for his ballistic vest.”

Johnson was on probation at the time of the shooting for a domestic violence conviction involving his 12-year-old daughter, according to police.