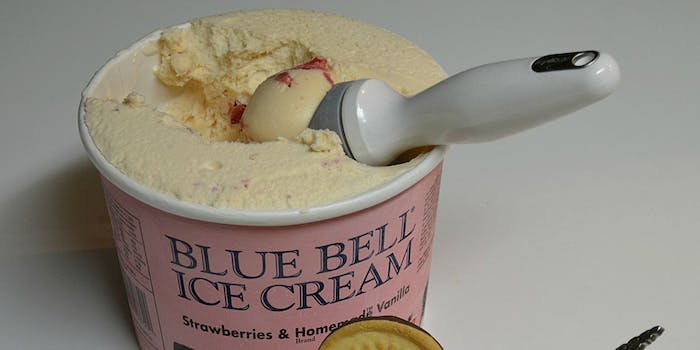 Blue Bell Creameries announced late Monday that it is expanding its recall to all of its products after they were linked to a multi-state outbreak of listeriosis that’s so far been responsible for three deaths.

The announcement temporarily crashed Blue Bell’s website and hit a subset of social media hard on Monday night. In a video message on BlueBell.com, CEO and President Paul Kruse apologized for the recall. “We are heartbroken over the situation and apologize to all of our loyal Blue Bell fans and customers,” he said in the video.

Blue Bell only sells its ice cream in the lower half of the United States, so this ain’t something people who don’t use “ain’t” in everyday speech are going to get, but for a good portion of us, it’s a pretty damned important development.

The reaction on Twitter ranged from people deathly afraid they’re going to get sick:

To Ragnarok-style proclamations that the only thing worse than listeria is going without their favorite ice cream while this whole mess is sorted out:

BUT I JUST ATE BLUE BELL.. AT LEAST IF I GET SICK I CAN EITHER SUE OR BE HAPPY THAT I GOT SICK DUE TO THE MOST DELICIOUS ICE CREAM EVER

I don't even care. You're not taking my Blue Bell ice cream from me.

The news is heartbreaking both because Blue Bell ice cream is, objectively speaking, the best ice cream you will ever cram in your mouth by the salad-spoon-ful and because it’s one of those shared cultural touchstones about growing up south of the Mason-Dixon line that New York hasn’t looked down its nose at yet in its ever-more-greedy attempts to cannibalize flyover country. And they’d never be able to, either. Blue Bell isn’t a dirty subway or a crumbling skyscraper. Blue Bell is a perfectly green lawn, a porch swing, and a hundred thousand fireflies coming out to greet the evening. It was quietly, peacefully ours.

People who give you the side-eye because you live in a state that has eight months of summer would never get that the only things you need to survive in 101-degree hellfire are a good ceiling fan and a half-gallon of Rocky Road in the outside freezer. But now the freezer is empty, and that ceiling fan’s seen better days, and you haven’t seen a firefly in a decade.

The biggest problem comes when tonight’s shock wears off and tomorrow’s depression really sets in, because how are we supposed to eat our feelings about this one?