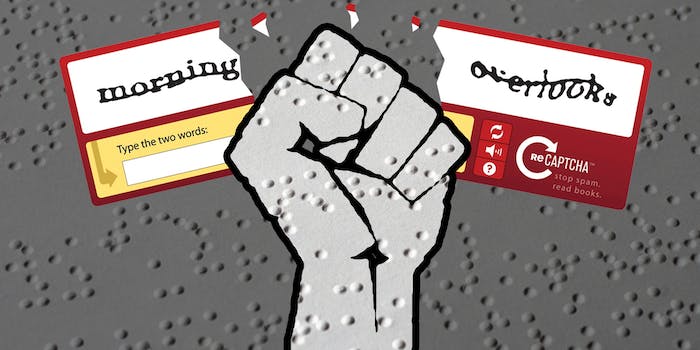 The blind community has had enough of CAPTCHA

A mere annoyance to the sighted, those scrambled words can make websites completely inaccessible to the visually impaired.

The blind community’s battle for web accessibility could mean an end to those annoying CAPTCHA forms at the end online forms—at least in Australia.

A coalition of blind and visually-impaired advocacy groups in that country are calling upon the government and private organizations to end the use of CAPTCHA—the distorted visual code used to distinguish humans from spambots online. Opponents say CAPTCHA prevents those without sight from being fully able to access the Web in the same way others do.

Groups like Blind Citizens of Australia, Able Australia, Media Access Australia, and the Australian Deaf-Blind Council are leading the way. They say CAPTCHA technology makes those they represent dependent upon others to use the Web.

Most blind or visually impaired Internet users utilize screen reader technology to view web pages. These programs convert the text and other visual elements of web pages into an audio format. Screen readers can work with varying degrees of success – depending largely on the formatting of individual sites. But CAPTCHA tends to be a universal stumbling block. Its distorted code of numbers and letters is deliberately designed to trick computer programs and thus works just as effectively on screen readers as it does on spambots.

There are audio alternatives for CAPTCHA, but many are so garbled that users have an even harder time deciphering these supposedly accessible formats.

“My experience with audio CAPTCHA has been almost as inaccessible as visual CAPTCHA; I must have listened to the Skype audio CAPTCHA 20 times before I gave up and asked my sighted friend to set up my account,” ACCAN disability policy advisor Wayne Hawkins told Australia’s iTnews recently.

It’s not just people who are blind, Hawkins said that Dyslexic, color-blind and elderly Internet users all tend to run into the same problem when trying to use CAPTCHA. The difficulty often forces them to break down and call upon others for help.

The advocacy groups leading this protest in Australia claim the use of CAPTCHA violates that nation’s Disability Discrimination Act. It’s an argument very similar to the one being made by advocacy groups in the U.S. who say many domestic websites also have the same accessibility shortcomings in violation of the Americans with Disabilities Act.

The National Federation of the Blind and the National Association of the Deaf have both lead the charge in this country when it comes to web accessibility. These two groups were responsible for bringing lawsuits against Target and Netflix respectively that forced these companies to begin changing their ways online.

CAPTCHA has even been a stumbling block for the White House’s own We The People petition website. The site cause a stir in the blind community back in May when visually impaired petitioners were unable to access the site to lend their support to a proposed international treaty that would allow copyright protected materials to be converted into accessible formats.

Of course, CAPTCHA does serve an important purpose. It’s a necessary roadblock to keep spammers from overloading inboxes. But there are some alternatives. Hawkins suggests verification emails as one screen reader-friendly alternative. Other authentication techniques such as logic puzzles and limited-use accounts can also prevent fraudulent account creation and spamming.