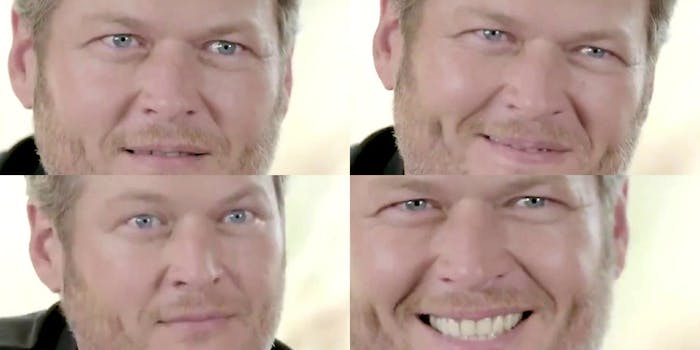 Just look at that rugged… grimace. How… charming?

No, Shelton’s crowning does not appear to be a joke—but the internet certainly thinks it is. This is the same guy who advocated for violence toward gay men, tweeting in 2012, “Re-writing my fav Shania Twain song… Any man that tries Touching my behind He’s gonna be a beaten, bleedin’, heaving kind of guy…”? And then in the same year, he also tweeted: “Wish the dickhead in the next room would either shut up or learn some English so I would at least know what he’s planning to bomb!!”

Racism and homophobia aside, maybe Shelton is attractive, perhaps even handsome, to some people.

But sexy? Deserving of a title shared by Dwayne Johnson, Chris Hemsworth, and Ryan Reynolds?

I mean honestly, didn’t People have a few more options?

Blake Shelton is not even the sexiest:

Proud to announce I was named Sexiest Pug Alive by @people pic.twitter.com/SkF4Zen8SJ

This just has to be some kind of prank—on Shelton and the entire population that cares about such a title—right?

This is so fucked up. Blake Shelton has been legally dead since 2012! pic.twitter.com/TS4ub32Vph

Blake Shelton is, at best, the sexiest divorced dad at this barbecue

Can’t we, like, impeach Shelton as sexiest man? Is that a thing? Isn’t this country a democracy? Clearly, Idris Elba had this spot locked down.

Blake Shelton named sexiest man… Is it because Idris Elba is a mythical being that he wasn't nominated? pic.twitter.com/L84T5vWLO9

Some of us would rather just be kept in the dark. We don’t know who this unattractive Shelton fellow is, and we certainly don’t want to find out.

I actually don't know who Blake Shelton is. (THIS IS NOT A REQUEST FOR INFO)

You know, at least Shelton’s win has allowed us to embrace our own outer beauty, comparatively?

OK, OK. Maybe People does have a point: Just take one look into Shelton’s cold, hard eyes and you’ll immediately notice that dark gleam that tells you, yes, he definitely took out all the other men in the world and is the only, and therefore sexiest, man alive.