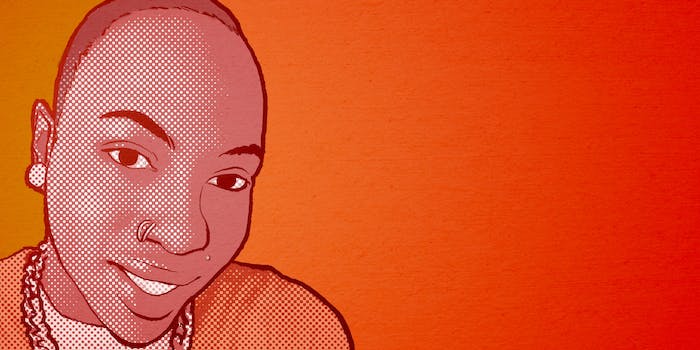 Why, as a black woman, I will never date online

'The concepts of black women and vulnerability seem almost paradoxical in a country that has socialized us to be seen as less-than-human.'

“Why haven’t you tried [random dating site] yet, Candace?” This is the one question I thought I’ve grown comfortable answering. I’ve had years to perfect my response. But the truth is: I’ve never tried online dating and don’t really have plans on ever trying it.

I usually blame my demanding schedule, my enjoyment of being single, my deep-seated aversion for small talk and asinine banter. But honestly, it boils down to one unwavering notion that my white friends (the people in my life that engage the most actively in online dating) find difficult to understand and is a lot harder to explain away: I don’t feel safe dating online as a black woman.

Women, all women, know the importance of being extremely aware of their spaces—both physical and digital—as it pertains to garnering the (often unwanted) attention of men. While something so basic like the mere act of walking down the street as a woman can prove to be dangerous, or even lethal, when the IRL unsolicited advances of men are declined, the online realm of dating presents the premise of safety and reassurance for some.

My white friends who swear by online dating often discuss the freedom of having the ability to approach guys first (Bumble), gauge a personal connection based on physical attraction (Tinder), and commit to finding true love for a price (Match).

But I don’t personally know any black women who have had positive experiences with online dating. The summaries of their experiences usually involve being messaged by men fascinated by the mere act of conversing with a black woman. Men who are hoping that it will lead to some type of forbidden sexual encounter. For the guys who do demonstrate genuine interest and go on actual dates with my friends, their charm gives way to their bottom line of wanting to hook up—and pretty much nothing more.

I’m sure there are some who have had success in the digital world when it comes to finding companionship, but as a black woman, I anticipate the same kind of treatment online as I do when I get hit on in person: assumptions about my culture and ethnicity, self-proclaimed sexual agency over my body, anger when I respectfully disengage.

“One young black woman found that pretending to be a white woman not only got her more attention, but the messages she received were overall better written.”

Then there are the stories that describe the harrowing experiences of discrimination and anti-blackness that black women on dating sites face regularly. They include black women who embark on dating apps to find potential suitors, but are often bombarded with racist banter in initial exchanges (“Think the NAACP agrees this is a free country, can IM anyone I want!”), who are seen as exotic sexual conquests (“I want to make love to a black chick”), and who are are subject to countless stereotypes (“Do you act black?”). One young black woman was so fed up with being overlooked and disrespected online that she experimented with her profile and found that pretending to be a white woman not only got her more attention, but the messages she received were overall better written.

This is the reason, not racial exclusivity, why sites like BlackPeopleMeet were created. However, they don’t necessarily provide a safe haven from vapidity and other forms of discrimination—say, colorism—from occurring. Black women can just as easily be disregarded by men who share a similar ethnic background as men who don’t. While the well-known idiom “Don’t knock it until you try it” can be applied to a lot of things, it’s pretty useless in this instance: I’ve made up my mind about online dating and have concluded that it might not ever be for me.

I’m not reciting this declaration from a self-constructed soapbox—I just seriously doubt I’ll ever find my footing when it comes to online dating. Granted, I am a bit guarded and cautious about expending significant emotion—but I dare you to find a girl who isn’t in 2016.

After a decade of dating, of putting myself out there in a happenstance kind of way, I’ve come to the conclusion that the concepts of black women and vulnerability seem almost paradoxical in a country that has socialized us to feel (and be seen as) less-than-human. We constantly straddle the line between invisibility and hypervisibility, humanization and dehumanization, desexualization and hypersexualization. We supposedly aren’t capable of being sensual or emotional or even sexual on our own terms. Black women’s bodies are constantly commodified and extracted for pleasure without our permission; we are regularly portrayed as angry, irrational, stubborn, and undesirable.

Online profiles—despite how detailed or thorough they may be—aren’t effective if groups of people are met with sheer vitriol because of their skin color. While dating in real life may yield way more misses than hits, the environments in which I have made matches have been pretty traditional: in college, at concerts, at a friend’s party, at a bar. Why I think this works for me is that I don’t actually go to them with any intentions of meeting my next boyfriend. There is no pressure to find the perfect match, no false perceptions of physical appearances, there is a more organic flow to a relationship’s progression.

That isn’t to say that I haven’t also experienced my share of tokenism and fetishization when it comes to existing and dating offline. I have had strangers on the street address me by the shade of brown they deem the most fitting—then yell at me as I tell them I’m not interested, smile, and walk away. I loved the shit out of my ex-boyfriend, but for the first few months of our relationship, he wore my blackness like a badge of honor. He couldn’t wait to tell his friends about his first interracial relationship and report back to me with their responses. He would also inquire extensively about everything from my hair texture to my ancestry, fascinated by every revelation. While his behavior surrounding our differences wasn’t ill-intentioned, it was poorly executed.

This, in turn, only heightened my fear of venturing online to seek any type of romantic relationship post-breakup. If someone I knew for so long and loved so much could be that insensitive about who I am, why would I subject myself to similar conduct from men in an environment, where the boundaries are nonexistent and the repercussions are just as absent?

Dating can be fun and exhilarating and fulfilling; it can also be stressful and demoralizing and unhealthy. Based on my experiences IRL and the testimonials of countless friends, I don’t think I’d take the plunge into online dating just yet. There is already pressure on black women to assimilate into a culture that never included us. It is a culture that places Eurocentric beauty features on a pedestal and punishes us for the bodies we were born with—and these ideals have managed to manifest into digital dating spaces.

My refusal to download the latest dating app isn’t an act of close-mindedness, but rather an act of self-preservation. And if I feel like avoiding it altogether is in my best interest, shouldn’t that be reason enough?

Candace McDuffie is a freelance music journalist and an avid Kanye consumer. Her work has been featured in publications such as Teen Vogue, Metro, HelloGiggles, and Revelist. She currently teaches creative writing at GrubStreet, a Boston-based nonprofit writing center.

Candace McDuffie is a Boston-based music and pop culture writer. Her work has been featured in publications such as Glamour, Paper, Entertainment Weekly, WBUR, Teen Vogue, DJBooth, Forbes, Marie Claire, Bandcamp, and Vibe, among others.