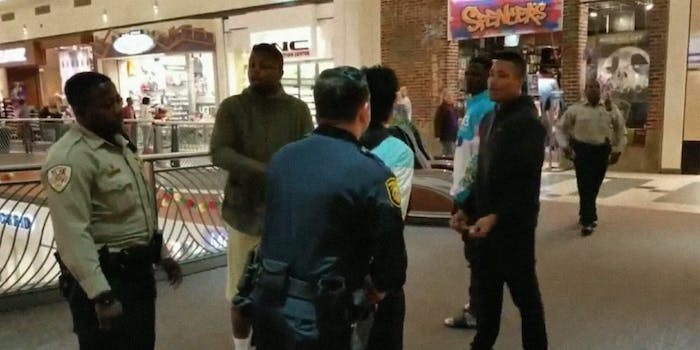 Black teen arrested for wearing a hoodie in a mall

The Black man who recorded the incident was arrested as well.

When mall security in Memphis kicked out a group of Black teens for wearing hoodies, saying they violated the dress code, a bystander contested the policy and he and one of the teenagers were arrested.

According to a Facebook post shared Peggie McKenzie, she and her husband, Kevin, were on their way to a cellphone store at the Wolfchase Galleria mall earlier this month when Kevin noticed an older white male security guard following a group of young Black men. A few moments later, the group was confronted by security and a sheriff’s deputy and led out of the mall. Kevin then began recording.

My husband, Kevin McKenzie, had the most shocking, infuriating, humiliating experience at Wolfchase Galleria on…

Kevin asked the deputy what the boys had done, and was told they had violated mall dress code by wearing hoodies. Since the McKenzies shared the story, someone else on Facebook posted Wolfchase Galleria’s code of conduct: It doesn’t say that hoodies aren’t allowed; the only mention of dress code is “wear appropriate clothing.”

Many online have pointed out that hoodies are only often deemed “inappropriate” by white people trying to police Black bodies and a means of racial profiling.

Wolfchase mall got that racist “No Hoodie” policy that, of course, is affecting black shoppers who are minding their business.

So this is a picture of me eating Friday night before I went to the Wolfchase Mall. Wore the hoodie all night to several stores at the mall, was there for well over an hour. No one ever harassed me. I wonder what could be different? 🤔 @memphisnews @MemphisFlyer pic.twitter.com/JyfpcmotLD

After being escorted from the mall, the group tried to re-enter. Mr. McKenzie says he heard one of the young men say, “We have rights.” They were then confronted by two deputies as well as two Memphis police officers who threatened them with arrest for trespassing. One of the young men, who was wearing a jacket with a hood that was down, was placed in handcuffs and led away. Then one of the deputies turned on Kevin. “You’re in violation of mall policy,” the deputy reportedly told Kevin. “So you can be asked to leave too so you might want to put your phone up.” Kevin said he only hesitated for a moment, and they placed him in handcuffs. The code of conduct also does not prohibit video recording, except for commercial use.

“Vague trespass laws are one legal tool that has been used to control black populations, and particularly black men, since slavery ended,” wrote Kevin. “The officers could have issued me a misdemeanor citation and released me, but I was told that because I continued talking, I was going to jail.”

In the end, both he and the young man were given citations and released. They were also both presented with a form to sign banishing them from the mall. Kevin said the frightened young man signed it, but he refused. “I didn’t need to because I will never spend another dollar at Wolfchase,” he said. “I witnessed a mall-to-prison pipeline in action and I will not support it.”