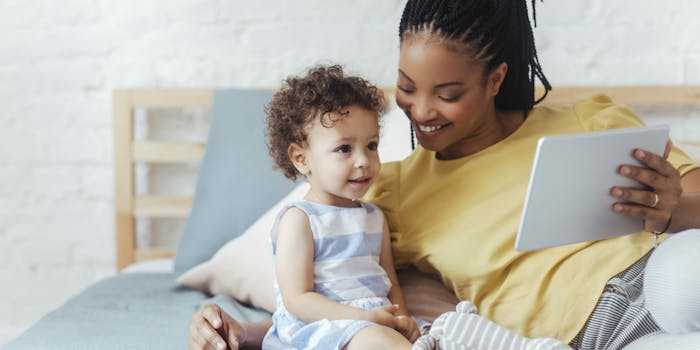 When I first found out I was pregnant, I welcomed motherhood with confidence. All throughout my pregnancy, everyone questioned whether or not I was nervous or had any fears. I brushed them off with a shrug of the shoulder and a head-shaking nope. I was ready for anything. I was so sure that I would be an amazing super mommy.

However, that all changed in my third trimester after I typed one simple word into a Google Image search: “baby.”

Immediately, the computer screen was flooded with images of chubby, smiling bundles of joy. Except, one thing was amiss: All of the babies in the photos were white.

Those Google Image search results brought about a simple, yet meaningful revelation that would challenge my confidence: Perhaps I was ready for motherhood, but was I ready to be a Black mother?

Somehow, up until that moment, I had not realized just how whitewashed my entire experience with babies and even motherhood (outside of my relationship with my own mother) had been. I taught baby-and-me swim lessons at high-end pools for about eight years, but seldom encountered Black parents or children. I had never seen a little Black girl with kinky hair be the focus of a parenting editorial spread. And I was struggling through the typical fears Black parents have, with little guidance, since we know that our children will face relentless hardships simply because of the color of their skin. I had to prepare myself for not simply having a “baby,” but specifically having a “Black baby.”

So I tried my search once more, adding the term “Black.” As anyone who has ever used the internet would know, this could have been disastrous. An onslaught of racist memes and mammies could have awaited me. However, the screen lit up with little brown smiling faces, and my heart skipped a beat. My little girl could look like the little dark-skinned girl with the huge afro styled with a pink headband or another with plats and puffs.

It became an almost-daily ritual for me to scroll through the image results imagining all of the cute hairstyles my daughter might possibly wear: braids, twist outs, plats, beads, hair bobbles. Each photo made me feel closer to my unborn daughter and more prepared to center her Blackness. I wanted her Black beauty to be my default, even if I lived in a society that deemed whiteness supreme.

You could say, the internet, strangely, became my place of solace—a resource where whiteness could be filtered out.

We, as parents, must do our part in promoting self-confidence in our teen girls. This is why I am so excited about the partnership between @always_brand  #LikeAGirl and @target  They have come together to empower girls everywhere by donating one million dollars to @GirlsOnTheRunInternational . They have also engaged @SimoneBiles to help encourage girls nationwide. Simone is the most decorated American gymnast and a great role model for girls regarding achieving their goals and having confidence. #Sponsored #PowerOverPeriods Check out Link to #GirlsOnTheRun in the bio.

A post shared by BlackandMarriedwithKids (@blackandmarried) on Nov 21, 2017 at 8:26am PST

Brandi Sellers-Jackson, a postpartum doula and founder of Not So Private Parts, a website created to inspire and educate mothers, believes that these spaces are imperative for Black mothers to connect with their own herstory and motherhood legacy.

“We have to write our own narrative and tell OUR story,” she told to the Daily Dot via email. “We have to see ourselves babywearing, breastfeeding, and practicing attachment parenting.” White women should not be the default image for maternal, adoring givers of life.

Black baby photo searches aside, I also learned there’s no shortage of Black parenting advice. From all corners of the world and walks of life, Black mothers and fathers chat on message boards like Cocoa Lounge to share their experiences with parenting. Blogs and websites like My Brown Baby, Mocha Manual, Black and Married With Kids, and Black Hair Media have become crucial to Black mommies like myself looking for parenting advice and inspiration on everyday things—from health to inequality—that white editors and bloggers likely wouldn’t even know to consider.

For example, when Jessy Schuster, a journalist and mother, realized her son had lice, she thought the standard treatment found at her local drug store would rid her son’s tresses of the bugs. But she quickly realized that anti-lice combs might not be the perfect tool for curlier hair textures.

“I had to google ‘lice on Black hair,’” she told the Daily Dot. “My phobia was I’d catch it, as I went natural four years ago. I had nightmares about having to shave off my hair since there was no way an anti-lice comb could penetrate my hair when a regular comb can’t even do the trick!”

She said she found several websites that listed tea tree essential oil and apple cider vinegar as natural repellents. And it worked. “Thanks to that blog,” she said.

The internet has also been a necessary tool for navigating the difficulties my baby is bound to face in a country plagued with systemic racism. It can act as a compass, pointing Black parents toward success and also offer the reminder that we come from a long legacy of powerful parents who have handed down centuries of baby rearing knowledge, even if society seldom reflects that fact.

“When we don’t see ourselves practicing these things,” Sellers-Jackson said about baby nurturing, “we begin to believe that it’s not already ingrained within us, and somehow not us. We begin to believe that we don’t come from a lineage, an ancestry of foremothers who practiced these things long ago. We forget that we come from women carrying their precious babes on their backs. We come from women breastfeeding and raising their owner’s children (wet nursing during slavery). Representation and Black-centered online spaces serve as reminders of where we come from and just how dope we truly are.”

Now this is cute and very creative! (Via @typhsbraids ) pic.twitter.com/gRJ6PjxrW9

As my daughter gets older, I will have to contend with the fact that America’s education system still remains separate and unequal. Students of color are far more likely to attend schools that perform poorly and where most of their peers are poor or low-income students, and hence are also less likely to get funding and allocated resources. That’s where the internet comes through again, with websites like GreatSchools giving parents access to information about schools in their neighborhood, including demographics and performance.

“I want my kids to have the best possible education, so I used GreatSchools to try to find a good neighborhood when I decided to move to Dallas with my kids,” Anita Davis, a single mother of two, told the Daily Dot. “I picked our neighborhood based on the grade of the school that the neighborhood was zoned for.”

For some, the internet has created the chance to search for opportunities for their kids to better understand their roots. Umunna Emenyou, a single father, believes that his daughter could have more opportunity to create a healthy Black identity in Africa, and he is using the internet to try to realize that dream.

“Her cousin went on a summer program in South Africa and loved it so much,” he told the Daily Dot via email. “For the first time in her life, she was unburdened by race and met people she had so much in common with, so she applied to go back full-time. I am thinking about the same for my daughter.”

For all its flaws and whitewashed defaults, the internet isn’t always such a bad place. As a Black woman, I wouldn’t have guessed a year ago that it would be the tool to make me feel less alone during a time that can feel so isolating.