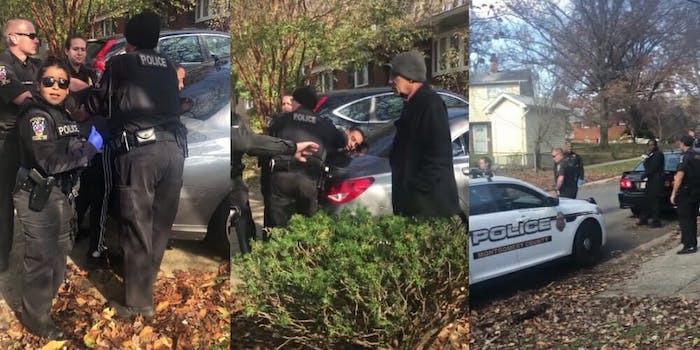 Police are now looking into his arrest.

Police are looking into the arrest of a 23-year-old Black man in the Washington, D.C., area after a video of the incident has gone viral. The man, Samir Ahmed, was arrested after helping a neighbor, who was intoxicated and lying in a nearby front yard, get back to his home.

According to the Washington Post, Ahmed, a Montgomery County, Maryland, resident, was arrested on Nov. 17 after he had found his neighbor drunk, passing out and falling down on the street. After dropping off the neighbor at his home, Ahmed then came back to his own house to see that police cars and fire trucks had surrounded his driveway.

Montgomery County police told him that they’d been called about a drunk man in the area, to which Ahmed said that he had taken the man home. When they asked Ahmed for the man’s address, Ahmed resisted sharing. That’s when police said they smelled a “strong odor of marijuana” on Ahmed and searched him, finding a plastic bag in his coat pocket with “suspected marijuana.”

In a video of Ahmed’s arrest, neighbors can be heard telling the four officers pinning him to the back of a car that Ahmed had helped the man who the call was for. After police told bystanders that Ahmed’s arrest was a private matter, one of the officers finally said that the “odor of marijuana” led to Ahmed’s arrest.

Ahmed, however, says he believes that the officers had scrutinized him because he is Black, despite him having taken the intoxicated neighbor home. He said one of the officers claimed he was intoxicated, and that she smelled marijuana on him, though he says he was sober. He was charged with resisting arrest, failure to obey a reasonably lawful order, obstructing and hindering, and disorderly conduct.

“If I had blond hair and blue eyes, this wouldn’t be an issue,” Ahmed told the publication. “She wouldn’t have been so disrespectful when I showed her nothing but respect.”

On Wednesday, the Montgomery County Police Department said it was “reviewing the circumstances” of Ahmed’s arrest, including a review of department policies, laws, and body camera footage. Ahmed shared the footage of his arrest to YouTube and Instagram, where it’s received more than 6,900 likes and 49,000 respectively.