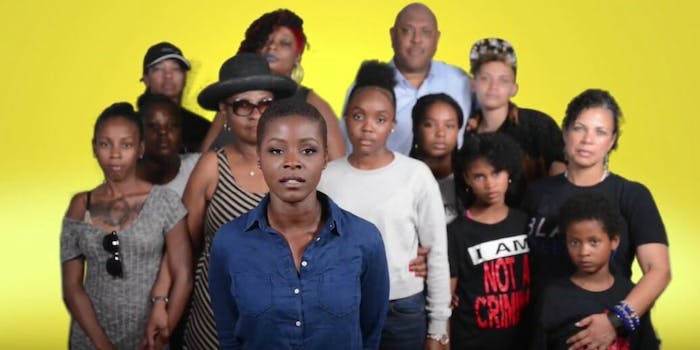 Screengrab via Dignity and Power Now/YouTube

The tone starts off foreboding but then pivots.

The NRA released an incendiary ad in April, calling for its members to fight back against “the resistance” with the “clenched fist of truth” while showing images of violent protests and injured Donald Trump supporters. The video went viral late last month when journalist Jeff Sharlet tweeted the video, hosted by conservative talk radio host and NRA spokesperson Dana Loesch, and described it as a “whisper shy of a call for full civil war.”

Now, Black Lives Matter has responded with its own video. It starts off in the same style as the NRA video, with foreboding music and chilling clips showing Philando Castile and Dylann Roof.

But then, the video changes tone.

“Wait, hold up,” the spokeswoman said. “What’s with the aggressive fear-mongering video tactics?”

She then brings up the lights to reveal family members of black men and women who were killed by police, saying, “When the NRA issues a public call to their constituents inciting violence against people who are constitutionally fighting for their lives, we don’t take that lightly. We know that we’re not safe. We’re not scared either.”

And the Black Lives Matter response: