The protesters say it was 'white supremacists' who opened fire Monday night.

Five people were shot late Monday night near a Black Lives Matter protest at a Minneapolis police station, according to police.

The shooting took place about a block from the Minneapolis Police Department’s Fourth Precinct, where protesters have been conducting a continuous sit-in since the fatal shooting of 24-year-old Jamar Clark by police officers on Nov. 15.

Minneapolis police have identified the suspects as three white men. A law-enforcement source told local news station KSTP that they may have been wearing bulletproof vests. No arrests had been made at press time.

In a statement on social media, Black Lives Matter Minneapolis said that, at around 10:45 p.m. Monday, several protesters were attacked by a group of “white supremacists.” After asking the three masked white men to leave the gathering, a few protesters reportedly followed them about a block north of the police station. There, at least two of the men drew weapons and opened fire. 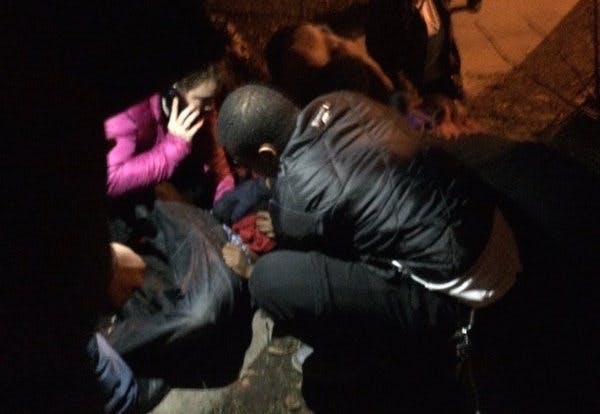 Protesters attend to a protester reportedly shot in the stomach. —

One protester was shot in the stomach, another in the arm, and two others in the leg, according to witnesses. A police spokesman said that two of the victims were taken to the hospital by ambulance and three others got there on their own. None of the wounded suffered critical injuries.

Authorities say that Jamar Clark was shot ten days ago in a struggle with police after he interfered with paramedics providing medical care to a woman who was assaulted. At a news conference last Thursday, police union president Robert Kroll said that, when he was shot, Clark had “physical control” over an officer’s pistol.

But multiple witnesses have come forward telling an entirely different story. A local barbershop owner, for instance, told CNN on Sunday that the police restraining Clark had “complete control” over him when he was killed. Another witness said he saw Clark in handcuffs immediately after the gunshot.

In a statement early Tuesday, Clark’s family called for an end to the occupation of the Fourth Precinct, citing public safety concerns. 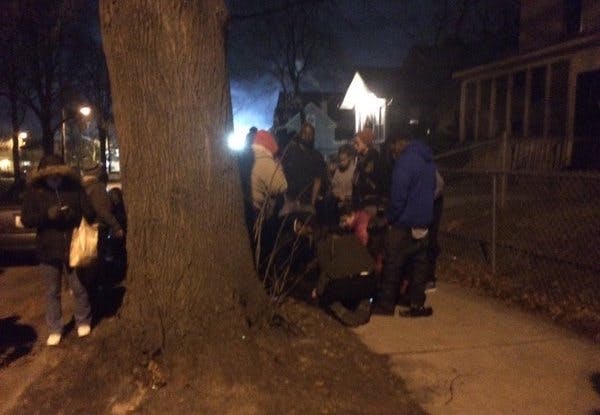 Black Lives Matter protesters huddled around one of the victims. —

“We appreciate Black Lives Matter for holding it down and keeping the protests peaceful,” said Eddie Sutton, Clark’s brother. “But in light of tonight’s shootings, the family feels out of imminent concern for the safety of the occupiers, we must get the occupation of the 4th precinct ended and onto the next step.”

The protesters have been calling for police to release footage from the night of the shooting. Minnesota Gov. Mark Dayton told reporters on Monday that he had seen one video captured from the back of an ambulance and that it appeared to be inconclusive. “I’ve seen the tape,” he said. “It doesn’t show anything that would be any confirmation of one point of view or another.”

Investigators say they have collected multiple videos from cell phones and other sources but that releasing them could taint witness testimony.

Black Lives Matter Minneapolis has planned a student walkout and march from the Fourth Precinct on Tuesday at 2 p.m. local time. Attendees have been asked to wear all black.