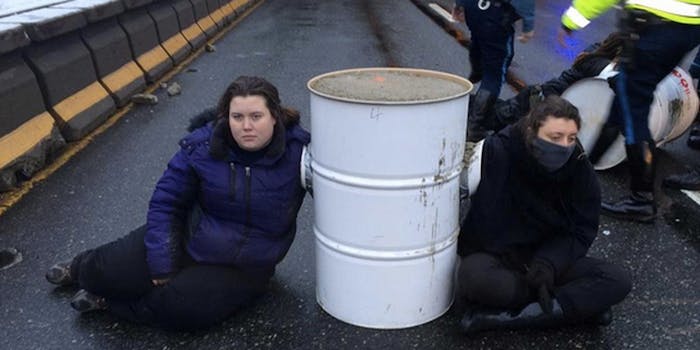 Firefighters had to saw through the 1,200-pound roadblocks.

Law enforcement and commuters were equally baffled this morning by a #BlackLivesMatter demonstration that saw Interstate 93 blocked in Milton and Medford, Mass. Some activists had apparently managed to seal their arms inside 1,200-pound barrels of concrete.

Protestors with arms chained together inside barrel on Rte 83 Milton pic.twitter.com/ORaUqQ7les

Protesters linking arms on I-93 in Medford earlier http://t.co/2xU5OBlCUT pic.twitter.com/vvpfWxXnDH

Both northbound and southbound traffic was snarled, and at least 23 protesters were arrested, according to WCVB 5, which quoted participant Katie Seitz on the reason for the obstruction:

“Today, our nonviolent direct action is meant to expose the reality that Boston is a city where white commuters and students use the city and leave, while Black and Brown communities are targeted by police, exploited, and displaced.”

A post on the Facebook page for Black Lives Matter Boston further explained the action and went on to list individuals killed by Boston police in the past 15 years.