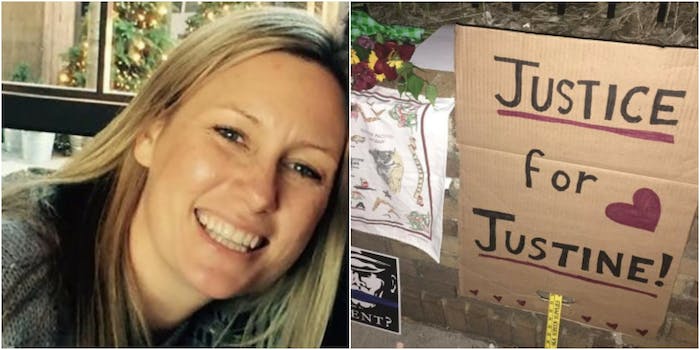 Calling on the movement is the wrong approach to take.

The shooting death of Justine Damond, an Australian bride-to-be, by Mohamed Noor, a Somali-American police officer, has turned the entire police brutality debate topsy-turvy and with good reason.

Since Black Lives Matter brought the issue of police violence to the national stage, cases that typically headline the news have involved black victims and white police officers—and the public’s response to such cases has become expected: Officer kills unarmed black citizen; short-lived to no media attention is paid; protests erupt in support of or against police; punishment is light, if at all. Wash, rinse, repeat.

This most recent case in Minneapolis involving a white civilian and a black cop has, however, garnered quite a different reaction. Damond’s death has dominated network morning shows and evening newscasts all week, the same photo of the beautiful, smiling blonde spread across the screen. Headlines focused on her status as a “bride-to-be” and a “yoga teacher.” We heard about her fiancé’s outrage and her family’s distress. Newspapers continue to break stories of every new detail, like a mystery that will only end when Noor is punished.

But that isn’t the same as social media outcry and activism, which, to be honest, are usually sparked when mainstream media ignores an injustice. For CNN, Doug Criss writes, “A vigil was held for Ruszczyk [Damond], but there weren’t widespread protest marches, like the ones Black Lives Matter held last year after Philando Castile’s shooting death at the hands of an officer in nearby Falcon Heights.” (After a vigil outside her home on Thursday, hundreds marched to a nearby park in her remembrance.)

While people have every right to be outraged at what seems like a very questionable reason (Noor says he was startled by a “loud noise”) to shoot an unarmed human, does Damond’s shooting death garner a “widespread” movement? Is there a larger pattern of injustice for the masses to galvanize over?

Untrained, trigger-happy police officers, perhaps. But this is not on par with why movements like Black Lives Matter were created. BLM gets mentioned at times like this because it is the most prominent group in America to address police brutality, so some might think it makes sense to call on the movement to be at the frontlines of the battle for “Justice for Justine.”

But that expectation shows how little people understand about the movement for black lives. It also shows the hypocrisy, and long-standing history, of expecting black people to do the uncomfortable work that white people don’t want to do.

I bet y'all we will hear crickets from #BlackLivesMatter on this one! Absolutely sickening!! #JusticeForJustine #BanIslam #JustineDamond

Black Lives Matter was never established to advocate on behalf of white people, nor has it ever had support from the general white public. Though the movement was initiated to address police brutality, from its advent BLM made it clear that its goal was to raise awareness about police brutality and its impact on the black community. Not advocate for all individuals impacted by police violence.

“#BlackLivesMatter was created in 2012 after Trayvon Martin’s murderer, George Zimmerman, was acquitted for his crime, and dead 17-year old Trayvon was posthumously placed on trial for his own murder. Rooted in the experiences of Black people in this country who actively resist our dehumanization, #BlackLivesMatter is a call to action and a response to the virulent anti-Black racism that permeates our society. Black Lives Matter is a unique contribution that goes beyond extrajudicial killings of Black people by police and vigilantes.”

The racial specificity with which Black Lives Matter approached the issue of police violence is completely sensible, especially when we consider the fact that black people are 2.5 times more likely to die at the hands of police than white people. Not to mention, since 2005, only 35 percent of officers were convicted for fatal on-duty shootings, according to a study by longtime researcher Philip Stinson. A movement that specifically addresses the disproportionate rate at which black people are killed by police is not only justified, but necessary.

The black community has used the Black Lives Matter platform to bring awareness to its causes, organize marches, advocate for police reform, and collect donations for victims. Among many other initiatives, the movement launched Campaign Zero, a project that lists proposals for police reform, detailing ways to reduce racial bias and mandating that officers undergo better training and always wear body cams so that they are held accountable for their interactions with black Americans. The Say Her Name Campaign specifically shed light on the violence endured by black women at the hands of police, which often goes unreported in the media. Under the banner of #BLM, students at the University of California pressured the school to pull out from its $30 million prison investment. The movement has even had a huge impact on politics, prompting 2016 Democratic nominees like Bernie Sanders and Hillary Clinton to actually address gun control and the need for prison reform as a part of their national campaigns.

Insisting Black Lives Matter owes Damond its advocacy is re-centering the narrative to say that police brutality is a problem for black people to fix, and that violence is only worth getting worked up about if a pretty white woman is victimized. If your rebuttal to this is “Well, don’t #AllLivesMatter?” then I hope to see you in the streets the next time a pregnant black woman like Charleena Lyles gets shot in front of her children.