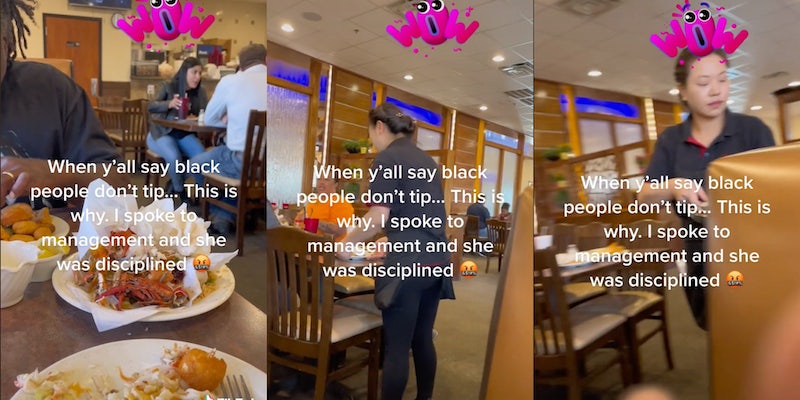 'It becomes a self fulfilling prophecy. They think we don’t tip so they don’t give us service and then we don’t tip.'

In a viral TikTok video, two Black customers claim they received no service at an Asian restaurant in Lake Charles, Louisiana.

One of the customers, known as Coach Toni (@coachtonifreeney) on TikTok, recorded their waiter at the restaurant allegedly ignoring them. She uploaded the footage to the social media platform where it reached 222,000 views as of Tuesday.

In the video, Toni and another Black customer appear to be in the middle of their meal and have a plate of trash placed to the side of their table, presumably hoping that the waiter will take it away. In a comment on the video, Toni names the restaurant as La Star Buffet, Sushi, Hibachi Grill, And Chinese Food.

“Stop saying black people don’t #tip!” Toni writes in the video’s caption. “We always leave big #Tips but don’t tolerate this unacceptable #service! Why are #asians like this? Someone please tell me because it happens too dang often. I spoke to #managment and she tried to lie.”

Throughout the two-minute video, the pair’s waiter is seen roaming around the restaurant and tending to other customers. Toni says the plate had been waiting to be picked up “for the longest” and claims that the waiter was intentionally ignoring her and her companion.

“When y’all say Black people don’t tip… this is why. I spoke to management and she was disciplined,” the video’s on-screen text says.

Toni’s video garnered a slew of comments, with several Black TikTokers saying they often experience racial discrimination when eating out. Some said they don’t tip waiters who don’t give them good service.

“It becomes a self fulfilling prophecy. They think we don’t tip so they don’t give us service and then we don’t tip,” one viewer commented.

“We have all dealt with it… my daddy tip a penny and wrote a note as to why she got a penny,” a second viewer commented.

A third wrote, “Thank you so much for posting this because this is exactly how we as black people get treated when we go out I will say that I have gotten treated the best by Hispanic waiters and waitresses so I will tip them well because they always treat my family well when we go out.”

Other TikTokers shared their tricks for dealing with lackluster service.

“That’s when I start putting the dirty dishes on the clean table next to me, [laughing emoji] They hate that,” one user wrote.

“I’ve had to literally raise my hand and get the wait staff’s attention,” another user shared.

Someone else wrote, “You better than me ‘MADAM’ ‘HELLLLOOOOO’ can you come get these plates plz [laughing emoji].”

The Daily Dot reached out to the creator via TikTok comment and to the restaurant via email.