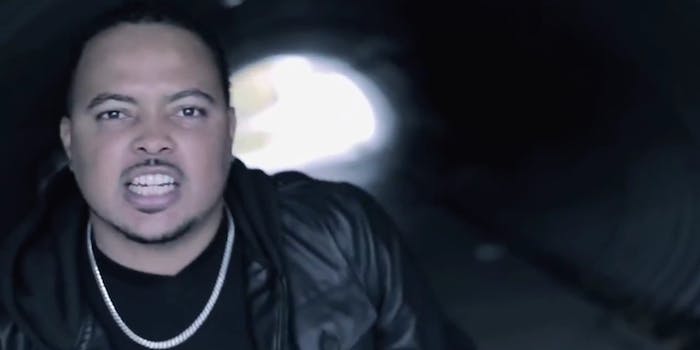 This Christian rapper has his own ‘Same Love,’ and it’s not exactly LGBT-friendly

“It’s funny how the media portrays things,” he says in the opening lines. “They really pushing hard for this gay thing.”

A Houston rapper named Bizzle is the latest person to critique Macklemore & Ryan Lewis’s LGBT equality anthem “Same Love.” Earlier this week, he released his very Christian response to the song, which is him basically rapping over the instrumental track.

Macklemore’s performance of “Same Love” on Sunday’s Grammys, and the marriages performed during the song, raised questions about the meaning of the song and its commercial effect. Bizzle, however, quotes Bible verses before his version even begins, and then takes the media to task for trying to push their agenda.

“It’s funny how the media portrays things,” he says in the opening lines. “They really pushing hard for this gay thing.”

He also addresses how there are “people from the LGBT community out here, running up in churches, disrupting services, kissing on the pulpit,” and questions the way “Same Love” has been used to parallel the struggle of the LGBT movement with the civil rights movement:

“So quit comparing the two, it ain’t the same fight. You can play straight, but we can never play white.”

There are a lot of conflicting messages in the song. Towleroad broke down some of the lyrics, including how the gay pride rainbow actually belongs in the Bible. If you happen to have one handy, you can totally fact check that:

And that rainbow you using as a gay pride symbol? It represents a covenant with God if you didn’t know. Check Genesis 9:13 for the info.”

But Bizzle doesn’t want you to get his messages twisted:

KNOW THIS! To those cheering me on while calling people fags, and devaluing them, dont get it twisted, I am NOT on your side #YouCanGetItToo

Bizzle’s used his Christianity to oppose other rappers’ messages before: In 2010, he took Jay-Z to task, and in 2011, he penned a “letter” to Nicki Minaj questioning her values.

Beyond his questionable message and use of Bible passages to judge people whose lifestyle he personally sees as wrong, the song’s just not very good. Still, it’s gotten more than 30,000 plays on YouTube since Tuesday.

Screengrab via God Over Money/YouTube