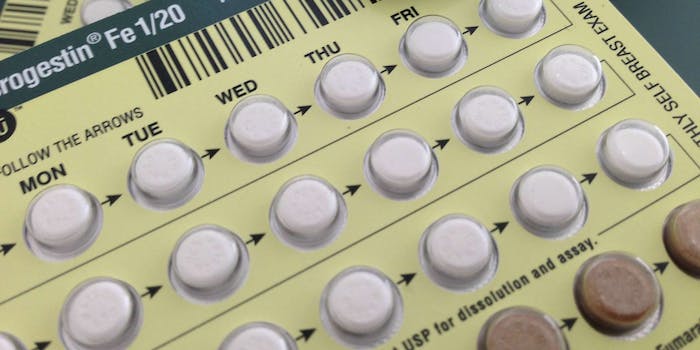 An upcoming documentary is spreading dangerous lies about birth control

Many claim that hormonal contraception is dangerous. But in reality, it's quite safe and effective.

Today, the Guardian published a video about the potential negative side effects of hormonal birth control. According to the clip, taking hormonal contraception increases the risk of getting blood clots, which can potentially lead to severe health complications and, in some tragic cases, death.

While the video claims to be showing women the other side of the birth control study, it’s really just cherry-picking information and fear-mongering. The clips are excerpts from an upcoming documentary called Sweetening The Pill, which is based on a book by the same title that was published in 2013.

Written by Holly Grigg-Spall, the book critiques the pill as suppressing women’s natural femininity by suppressing menstruation. It also claims that the pill has wanton and far-reaching side effects, from horrendous mood swings to deadly blood clots.

But when Grigg-Spall’s book came out in 2013, it garnered quite a bit of criticism. As Lindsay Beyerstein wrote for Slate:

Grigg-Spall’s argument rests heavily on her own bad experience with Bayer’s Yasmin (which she blames for turning her into an emotional wreck) and comments on various websites dedicated to sharing pill horror stories. She indignantly anticipates that readers will dismiss these anecdotes: “I was sick, and then, I was well,” she writes. “That this is not enough evidence of the pill’s impact reveals so much about why women are encouraged to take this drug in the first place.” In other words, she accuses her critics of being sexist if they won’t accept her cherry-picked testimonials as proof that the pill harms all women.

Gretchen Sisson also took issue with Grigg-Spall’s methodological approach in her review for Bitch Magazine. “Grigg-Spall has a notable disdain for scientific research, if her extremely sparse citations are any indication,” she wrote, adding that Grigg-Spall even includes a sentence in the book saying that scientific researchers “only find out what they start out looking for.”

Despite these critiques of the science featured in Grigg-Spall’s book, the premise of Sweetening the Pill resonated with documentary filmmakers Ricki Lake and Abby Epstein, best known for the film The Business of Being Born. The two launched a Kickstarter to raise funds for their new documentary based on Grigg-Spall’s “feminist” take-down of the pill, as well as other hormonal contraceptives such as the ring, the patch, and intrauterine devices (IUDs).

But the problem with Grigg-Spall’s (and, by proxy, Lake and Epstein’s) critique of hormonal contraception is that it’s not rooted in science. While the testimonies of the families who lost their daughters and sisters to pulmonary embolisms caused by Yaz and NuvaRing are nothing short of tragic, they are also rare.

While the testimonies of the families who lost their daughters and sisters to hormonal contraception are nothing short of tragic, these deaths are also extremely rare.

But double-blind, placebo-controlled studies show that only about 15 women in 100,000 will have blood clots on the pill. And blood clots aren’t always deadly, especially if they’re caught early. Yaz and NuvaRing, which contain the third-generation progestins the video references, ups that risk to about 25 women in 100,000. But the increase in mortality rate is only about 1 or 2 women per one million.

Despite those statistics, the video puts forth the absurd hypothetical that if you take 10,000 women and tell them about the pill, it’s accurate to say that “a few of [them] will die.” That’s just false. Take 10,000 people in any room and tell them that at least one of them won’t make it to Christmas, and you’ll probably be right. You could easily do the same thing for basic daily activities like driving a car. You wouldn’t even need to round up 10,000 young people in a room to know that at least one of them will be injured or die from a car accident before their 25th birthday.

Unfortunately, it’s a statistical certainty that a tiny handful of women will die from taking the pill. But many more will find an improved quality of life that extends beyond having ultimate control over when and if she has children. Effects like the regulation of premenstrual syndrome, shorter and lighter periods, clearing up of acne, and effective treatment for pelvic pain from endometriosis are all proven positive effects of the pill.  At a time where access to birth control has become a political battleground, it is arguably irresponsible to push forward such scare tactics under the guise of promoting awareness and education.

At a time when access to birth control has become a political battleground, it is arguably irresponsible to push forward such scare tactics under the guise of promoting awareness and education.

Contrary to popular belief, double-blind, placebo-controlled studies don’t show any significant effects of birth control on mood, weight gain, or nausea. So why, then, do so many women claim to have such side effects from the pill? Honestly, a lot of these side effects can probably be attributed to the power of suggestion. After all, we tend to think of ourselves—women and teenagers especially—as emotional slaves to our hormones. It’s not that surprising that we would have some pretty high expectations of the potential side-effects of hormones as medication.

But Lake, Epstein, and Grigg-Spall want to promote the various options women have for birth control, namely the “fertility awareness” method, in which women map their own cycles. In their Kickstarter video, Lake and Epstein allude to the idea that women may have an easier time tracking their cycles with new period-tracking apps, thus freeing themselves from the chains of hormonal birth control all together. But in the real world, 25 percent of women who perfectly track their fertility over 10 years will eventually become pregnant, according to this interactive guide to birth control effectiveness published in the New York Times.

Even with the advent of period-tracking apps, there’s no reason to believe they’ll be any more useful than, say, the traditional method of tracking your cycle on a calendar. Frankly, even the most regular among us may have an aberrant cycle or two where ovulation happens much earlier or later than usual, thus increasing the risk of pregnancy.

Until we see the male birth control pill hit the market, we’re stuck with traditional barrier methods and female contraceptives. Luckily, women have tons of options for contraception. And contrary to what Sweetening the Pill and its upcoming film adaptation tell us, hormonal birth control is one of them.

Correction 10:05pm CT, June 23: An original version of this article quoted a figure cited in the video that a few out of every 1,000 women on the pill will die. The original quote was actually out of every 10,000 women.

Image via lookcatalog/Flickr (CC BY 2.0)