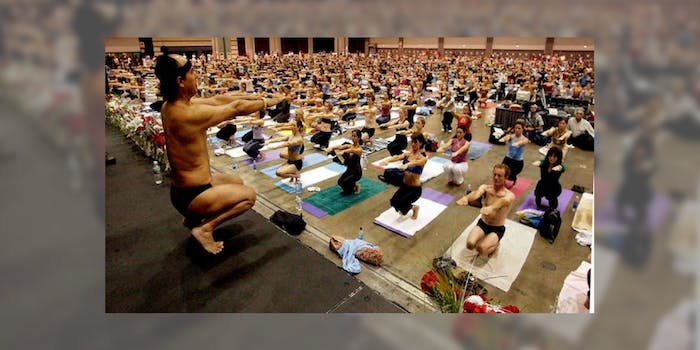 He shouldn't 'get away with what he did to me,' says a former employee.

Bikram yoga founder Bikram Choudhury, who was found guilty of sexually harassing and unlawfully firing a former employee last year, is wanted in the state of California for failing to pay more than $7 million in damages toward the employee.

According to the New York Daily News, a Los Angeles judge has set his bail at $8 million.

Between 2013 and 2014, five women filed suits against Choudhury, accusing him of rape, sexual harassment, and sexual assault. In 2016, Choudhury was found guilty of sexually harassing and unlawfully firing Miakshi “Micki” Jafa-Bodden, who worked as Choudhury’s legal adviser from 2011 to 2013, and was ordered to pay her $924,500 in compensatory damages and $6.4 million in punitive damages for acting with malice, oppression, and fraud.

Choudhury claimed last year that the court costs and a decline in business left him nearly bankrupt. According to BBC News, Choudhury fled California after being ordered to pay damages to Jafa-Bodden, and was served court papers in Mexico. Lawyers have tracked his cars and property out of state. There are also court orders in place to stop him from moving personal items in Florida and Nevada.

After the verdict in 2016, Jafa-Bodden told the Daily News that she felt vindicated. “I want to thank my trial team for standing by me during this fight against a very rich, powerful and dangerous man,” Jafa-Bodden said. “I wanted to make sure he didn’t get away with what he did to me and my daughter and hundreds of yoga students who trusted him with their time, money and bodies.”